In Chapter S. Lucille Pulls the Chain the Galaxy Zephyr continues fighting the Enemy Hurricane. When the Enemy Hurricane surrounds them like a bubble, Commander Lucille pulls the chain on her Wheel, which, through strange cosmogonic processes, gets Beatrice hit by a bus.

Why do bad things happen? Akayama DanJay‘s position is that unfortunate random events are necessary and preordained in a grand, cosmic sense. Call it physical determinism; call it God’s will; or just call me crazy.

In Akayama DanJay the reality behind realities is a fight between giant anime robots, which I hope brings to mind mythological wars between gods. Lucille wears skulls and body-parts around her waist a la Kali, while her weapon is a chainsaw discus a la Vishnu. I’ve already discussed how Lucille’s giant robot is my take on Satan building a cannon to kill God in Paradise Lost. I try to mix and match so many mythologies that my writing isn’t so much appropriation as appreciation. Still, with the surreal imagery I’m pumping in, I occasionally reference stuff I didn’t even know about.

I recently read The Fox and the Jewel by Karen A. Smyers. The book explores worship of Inari Okami, a Japanese deity with huge range of devotees. Inari straddles Buddhism and Shintoism; Inari has male and female forms; and Inari brings prosperity in both agriculture and business. The only commonalities Smyers notes across the majority of Inari depictions are associations with jewels, foxes, and rice.

Meanwhile, Professor Akayama grows compound eyes which I compare to jewels. She takes Faith the fox as an assistant. In this section, she spews white powder from her robes to accelerate Earth’s regeneration.

Inari’s jewel “sometimes [has] the power to restore the spirit of life,” says Smyers. “The jewel has even stronger associations with new life when it functions as a kind of womb or egg.” Akayama is a giant bird associated with eggs who endeavors to reconstruct all Earth’s life. I couldn’t have planned better parallels.

I’m almost concerned Akayama reflects Inari so closely it looks intentional. But Akayama also reflects Quetzalcoatl (she’s a feathered serpent who sets herself on fire) and she creates Sheridan, Akayama DanJay‘s Garden of Eden, so I think I’ve spread my religious influences thin enough to get away with it.

Still, in hindsight, it’s almost hard for me to deny referencing Inari on purpose. Look at typical depictions of Inari’s jewel, which is said to grant wishes (generally either material wealth, fertility, or spiritual clarity):

The jewel is the red thing between the fox and the lady, and the gold thing in the black corner. It’s often called a “flaming” jewel. To me, the wavy, spiky jewel symbol is vaguely reminiscent of how I draw hair, especially Lucille’s…

Retroactively finding meaning, I’d say this advances Akayama DanJay‘s position that salvation is internal. The jewel is our skull. The sacred is inside us. Akayama’s emerald eyes don’t grant her omniscience; they represent the knowledge she already has.

I wrote Faith as a white fox because I was inspired by kitsune, the Japanese fox common in folklore, but I didn’t write her like that to tie her to Inari; rather, I found Inari while Googling kitsune to research Faith. Likewise, I had plans for Akayama’s white powder since the first chapter and never thought of it as representing Inari’s association to rice until writing this section, where I lean into it.

But parallels to Inari nestle perfectly into Akayama DanJay. Karen Smyers tells us how the diverse methods of worshiping Inari present a unified whole despite irreconcilable differences: “there is no single center for the whole world of Inari,” says Smyers, “no space sacred to all worshipers, not even one image of the deity that is common to the whole. There are multiple centers, and the centers themselves are multiple.” In the same way, the irreconcilable differences between Dan and Leo must be reflected in the Wheel rebuilding Earth. The whole is the sum of all parts, even parts in opposition. Leo, the asshole with a swastika tattoo, cannot be swept under the rug when rebuilding humanity.

In hindsight, I couldn’t have purposefully chosen a better deity whom most Americans have never heard of, but whose diverse modes of worship appropriately comment on divisions in modern American politics. I just sort of bumbled onto it, like Beatrice bumbling in front of a bus. Call it tapping into the cultural subconscious; call it Inari’s fox messenger intruding on my narrative; call it a coincidence; or call me a crackpot.

Mark Rosewater, a designer of Magic: The Gathering cards, has a lovely phrase he uses when fans observe neat relationships between cards and asks if they were intentional. “I don’t deny things which are cool.” That’s great advice; if someone discovers something  inadvertently awesome, pretend you did it on purpose and commend them for noticing. But I write these commentaries because I worry readers imagine everything in their favorite books is on purpose, and I disagree. Writing is mostly bumbling; good writing is bumbling with style.

Thanks for reading my bumbling.

PS: On a lark I watched the first few episodes of Puella Magi Madoka Magica, an anime about magical girls fighting witches. It’s not really my thing, but one character jumps out at me: Kyubey is a white-fox-creature who makes middle-schoolers into magical girls using a jewel.

If this isn’t an intentional nod to Inari, it just shows how deeply Inari imagery is ingrained into Japanese culture. (Wikipedia notes 1/3 of all Shinto shrines in Japan are devoted to Inari.)

PPS: In this chapter Lucille’s Galaxy Zephyr heals its wounds with rivers of liquid gold. Besides referencing the practice of kintsugi in which broken wares are repaired with gold, invoking wabi-sabi‘s appreciation of each object’s individual journey… 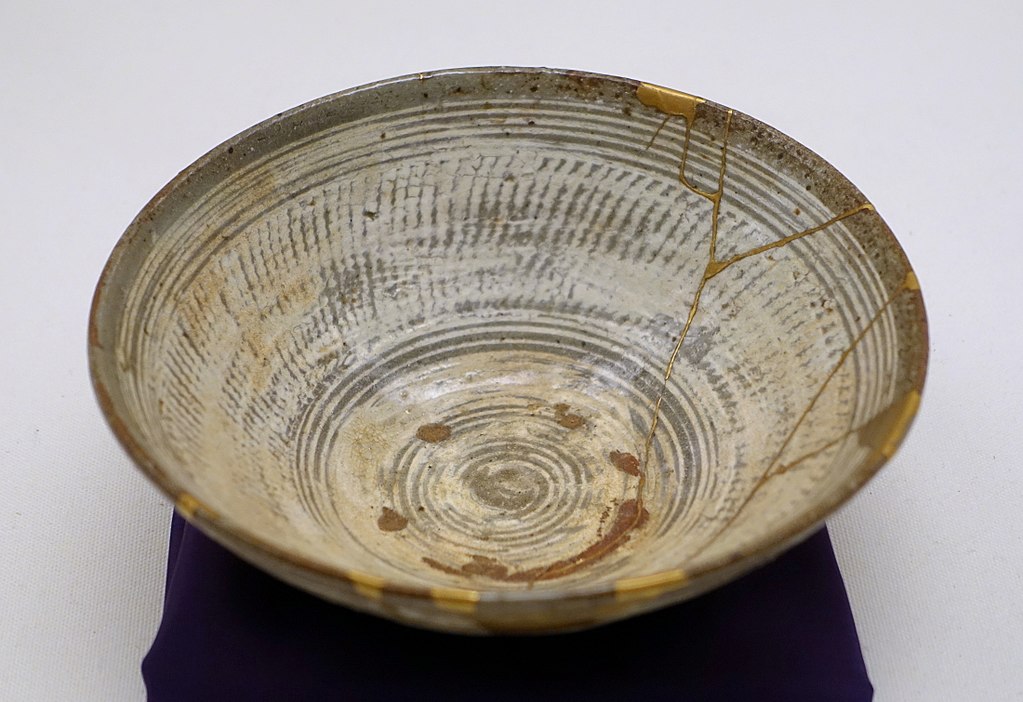 …I’m trying to reference Dante’s vision of The Old Man of Crete. In Dante’s Inferno, the rivers of Hell are the tears from a statue. Says University of Texas’ Dante-worlds,

Dante invents the story of the large statue of an old man–located in Mount Ida on the Island of Crete–for both practical and symbolic purposes ( Inf. 14.94-120). Constructed of a descending hierarchy of materials–gold head, silver arms and chest, brass midsection, iron for the rest (except one clay foot)–the statue recalls the various ages of humankind (from the golden age to the iron age: Ovid, Met. 1.89-150) in a pessimistic view of history and civilization devolving from best to worst.

…Although the statue is not itself found in hell, the tears that flow down the crack in its body (only the golden head is whole) represent all the suffering of humanity and thus become the river in hell that goes by different names according to region: Acheron, Styx, Phlegethon, Cocytus (Inf.14.112-20).

To me, this statue totally sounds like a giant anime robot. It’s a giant human whose parts are different-colored metals and materials; it’s perfect!

Lucille’s Galaxy Zephyr re-contextualizes the image: rather than crying tears which flood Hell, the robot bleeds gold which seals its wounds. Humanity’s suffering is not hellish oppression; our ability to feel remorse is humanity’s redeeming feature which emboldens our future efforts.