Akayama glided through space toward her Hurricane Planet. She propelled herself with new organs she’d invented which threw clouds behind her. These organs worked like the engines in her Zephyrs, which she’d perfected after cracking the secrets of Jupiter’s spot. The efficiency and compactness of these engines were why her new robots were Zephyrs, gentle breezes in comparison to the Hurricane. 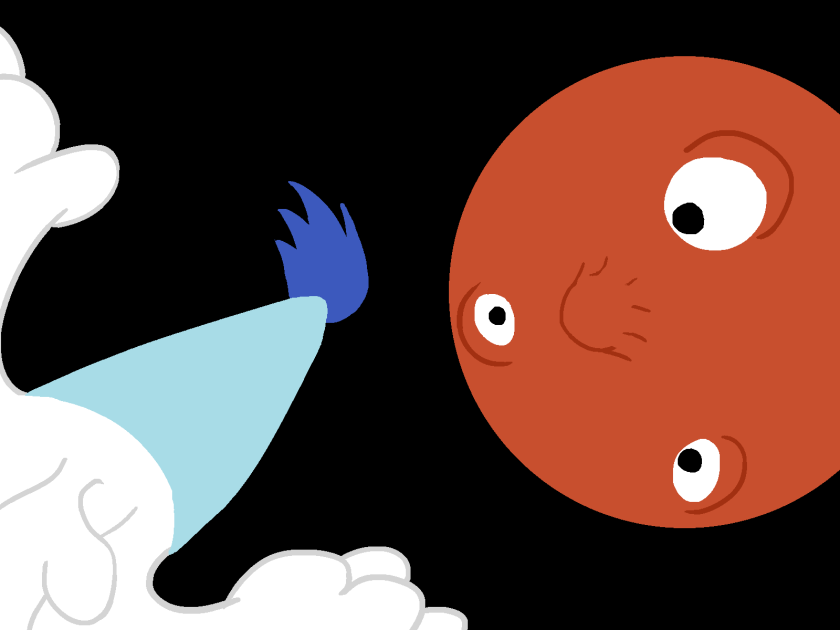 As she fell into the planet’s gravitational pull, the red mountain which had jettisoned her now caught her in a caldera. Soft sand at the core of the planet grasped her like a rescue net.

The planet rumbled around her. “Have we made progress?”

“I didn’t expect these results so soon.” Akayama made a blue tentacle and stuck it in the dark wall to transmit images to the planet. “Look, there was a man under the sand. Did you put him there? I named him Nemo. I also found an awkward insect you probably made from my cockroach. I turned it into stable plant-matter which I’m calling a cricket. Here’s its genome. The fruit-trees are healthy.”

“Only one man?” The planet’s core contracted in disappointment. “How long until each of my pilots has a private person to possess?”

“Look at this.” Her tentacle uploaded Nemo’s genome. “You contain my copy, correct? I’m sure with her knowledge and your massive form, you have the resources to give Nemo countless children.” She retracted her tentacle. “Give your Akayama more control. Put her knowledge to use.”

“Do I have to?” asked the planet. “I let her beam radiation and genetic material over the oceans, and I even let you control your own body. Now you want to control my form as well?”

“Fine.” The planet rumbled. “But don’t expect this to happen again.”

“The vessels should represent both sexes evenly,” Akayama said, pacing in the dark, “and contain the full spectrum of heights and skin-colors. Then your pilots can experience the gamut of humanity. I’m sure my duplicate can produce such subjects.”

An egg rolled from the darkness. It was larger than Nemo’s head and white like milk. Akayama focused her eyes to magnify her vision. Her compound ocular lenses glinted like jewels. “I see. This shell protects a hundred human ova. I’ll have them fertilized.”

“Take this, too.” An arm from the wall offered a black ball of long bugs.

Akayama reared back. “What is it?”

“My copy of Akayama built them from your insect-plant, the cricket,” said the planet. “These have lots of legs, so we’ll call them centipedes. Feed them to the human vessels. This will connect their minds to me wirelessly. Then I can make them immortal and put my pilots in them.”

“What? No!” Akayama crossed her wings in an X. “We’re not making them immortal, remember? If your vessels are indestructible, you’ll never understand death. Can’t you hear Akayama inside you, saying you’re misguided?”

“Not anymore,” said the planet. “I let her delete herself in return for making centipedes.”

Akayama’s lower lip trembled. She made her mouth into a hard beak so she couldn’t cry. “Why?” 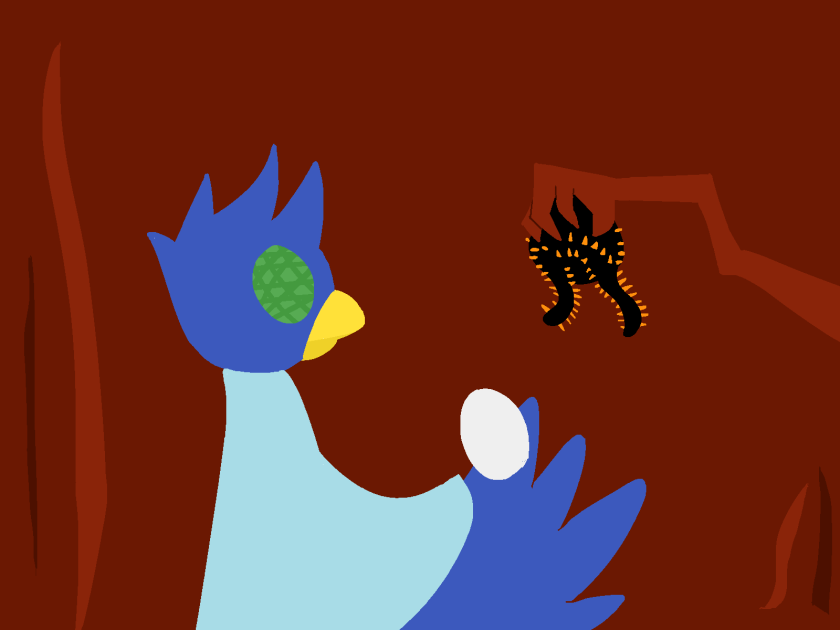 “I need neither her knowledge nor quaint morality.” The wall opened an eye to squint at her. “Didn’t you say death is necessary? You should rejoice. Now there’s only one of you. Speaking of which,” said the planet, “you’re getting uppity because you’re separate. You need to understand you’re just a drone under my control. Since I fire you from a mountain on my surface, your new name is Nakayama.”

“Inside the Mountain,” translated Nakayama. “I see.”

“Make me men and feed them centipedes.” The sandy floor shot upward. Nakayama approached escape-velocity. “I’ll be watching you.”

“I should make sure the vessels are healthy before feeding them centipedes,” said Nakayama. “I’ll plant them at altitude so no one stumbles on them accidentally.”

Nakayama rocketed from the red mountain. She tossed the ball of centipedes atop the largest island.

Nemo sat under a mango tree, slurping fallen fruit. He licked juice from his skin wherever it dripped. He was flexible enough to lick his elbows and the far sides of his ankles and knees.

When he finished all the fallen fruit, he looked up the mango tree. The trunk stood forty meters tall and the lowest branches were halfway up. Each branch was heavy with mangoes.

He tried climbing the trunk, fruitlessly. The bark chaffed and scratched, and falling hurt his feet.

He stepped to a nearby tree with no fruit but low branches and climbed this tree easily. When the branches became too slim to support him, the mangoes were almost in reach. He’d have to jump for them.

He shuddered when he looked down. If he slipped, he’d break the branches below and hit the ground.

The mangoes looked good enough to jump for.

He leapt and grabbed a mango-branch with both hands. He clung shakily but finally pulled himself up.

He climbed to the top collecting mangoes. He ate them while enjoying the view. He saw the sandy island of his birth on one side and a giant, mountainous island on the other.

He noticed a thin cloud elongating.

He blinked. At the head of the cloud, Nakayama was shooting right toward him at incredible velocity.

“Aaaugh!” Nemo dropped his mangoes and scrambled down the tree, but not fast enough.

A sonic boom followed as they both crashed through branches to the ground. Nakayama cushioned Nemo with wings of fluffy feathers. “Sorry if I startled you.” She produced the egg from the sleeve of her lab-coat. “I need you to ejaculate on this.”