It took a while for Nakayama to explain exactly what she wanted Nemo to do to the egg. When he finally got the idea, he stepped behind a bush and she obligingly turned away. Nakayama knew the new humans would need more space, so she made her wings razor-sharp and cut down trees to make a clearing atop the island.

She heard Nemo scream, first in pleasure, then in terror. Nakayama hurried to his side.

Grown adults spilled from the egg. Nemo covered his horrified face. “Congratulations!” Nakayama made her left wing into a blowtorch and lit a cricket for Nemo to smoke, but he was distracted by the emerging men and women. “You’re a father now. Omedetou!”

Soon a nude crowd filled the clearing. They were varied as Earth’s humans, but seemed at least superficially healthy. Nakayama lifted them to check for defects in their ears, eyes, noses, and throats. Nemo shook hands with each person as Nakayama put them down.

Still more people spilled from the egg. Eventually Nemo just let his children crowd around him for their handshake. “Name Nemo,” he said to them, “Nemo name.” Then he gave them their own names. His children shook hands with each other and introduced themselves.

When the crowd was so thick Nemo couldn’t find hands to shake, he pushed his way out and climbed a tree. He yawped for attention: “Ora, ora, ora!” He bit an apple and showed his children the interior flesh. He licked sweet juice from his chin. He tossed the apple and a woman caught it in her teeth. She smiled and shared the apple with the man beside her. Nemo sat on a branch and demonstrated how to peel bananas and oranges.

Nakayama hefted a man from the crowd to check his health. The man screamed. Nakayama dropped him in surprise and barely caught his ankle before he hit the ground. “It’s alright, it’s alright!” she promised, but the man kept screaming. The crowd turned to watch Nakayama try calming him. “I understand—the first humans saw me alongside them, so I was ordinary. Now the crowds are thick enough you’ve only ever seen your own kind. You’ve established your sense of normalcy and now you’re meeting… me…”

Nakayama set the man down and examined herself. She was a giant, peculiar bird-creature. How could she convince anyone her presence was acceptable?

“Ora ora!” Nemo waved his hands. The crowd turned to him. He pointed skyward and the crowd squinted at the sun. Nemo whistled like a falling object as he pointed to Nakayama. Then Nemo mimed shaking hands.

The crowd oohed and aahed. The screaming man mutely shook Nakayama’s wingtip and opened his mouth to show his throat. Nakayama covered her beak in disbelief. “Thank you, Nemo.” Before she inspected more islanders, she quickly counted heads. Fifty islanders were already present and the egg only spewed more. The clearing wasn’t large enough. “Nemo! Come here!” She gestured for his approach and the crowd parted for him to pass.

Nakayama showed Nemo the trees she’d cut from the clearing. She flattened her wings into scoops and carved logs into rough canoes. She made oars from branches.

“You have more children coming,” she told Nemo. “Gather a group and row to that island over there.” She pointed to the mountainous island. “I’ll send the rest boat-by-boat as I inspect them.”

Nemo didn’t understand, so Nakayama pushed the canoe down the slope and it splashed into the ocean. “Ahh!” Nemo understood. He chased the canoe and called for others to follow. “Ora ora ora!”

Nakayama carved canoes so quickly there was always a boat voyaging from the fruity island to the mountainous one. Nemo stood cape-side to welcome each load of islanders to the coast.

This island had no fruit-trees, but birds like penguins larger than ostriches lounged on the beach laying eggs which islanders cracked open to drink.

Nemo turned. Three of his children approached, panting with their hands on their knees. “Oran dora,” greeted Nemo.

“Nemo,” they urged. They led him a mile up the island to point at a pine’s branches. They cupped their hands around their ears to tell him to listen.

Nemo heard a creature in the canopy. “Aaaugh, how does she land? This was an awful idea.” Now Nemo noticed a hanging vine. It was four feet long and the width of his arm. In fact, it seemed to be an arm with two double-jointed elbows. Its fingers clutched a branch.

The arm flopped in the tree. “Is someone down there? I can’t see you. Can you catch me?”

“Oh, Nemo! Nakayama told me about you. I’m your God now! Catch!” The hand released the branch. The arm crashed on the dirt. “Ow! Dammit!” 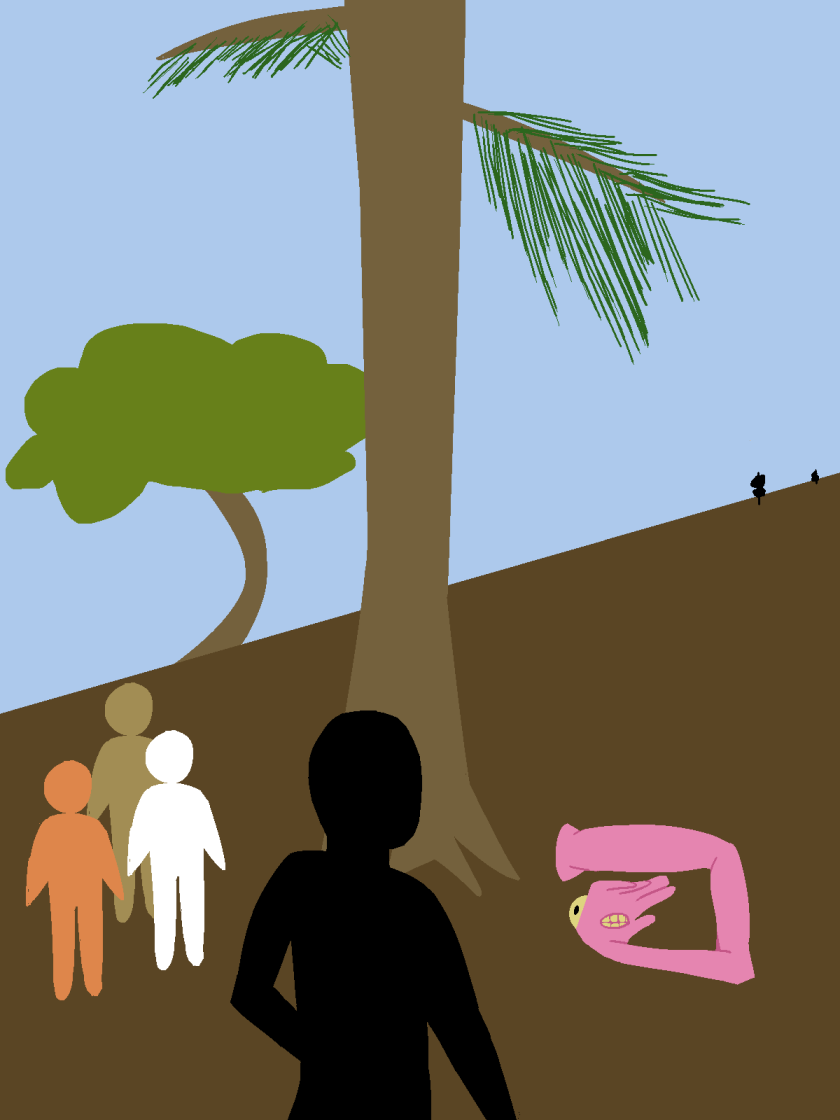 Nemo squatted to inspect the convulsing limb. The other islanders backed away.

“Not your fault, kid,” said the arm. Its skin was pink and its palm held a mouth. The back of the hand held an eyeball with a pupil but no iris. “You’re not smart like I am yet. Here, follow me. I gotta show you something.”

Nemo watched the arm bend its elbows to squirm. He walked after it and the three islanders followed him, but Nemo shook his head and pointed them back to the coast.