Nemo followed the arm up the island for hours. Its coiling movement unsettled him, but he vowed to keep watch lest the arm hurt his children. The arm’s eyeball occasionally stared at the sun, which watched back with its own eyes. All the eyeballs vibrated to communicate so the arm could navigate by the sun’s aerial view.

They left the pines behind and clambered over boulders. The only plants at this elevation were black bushes which Nemo had never seen, with slim leaves and sharp thorns. 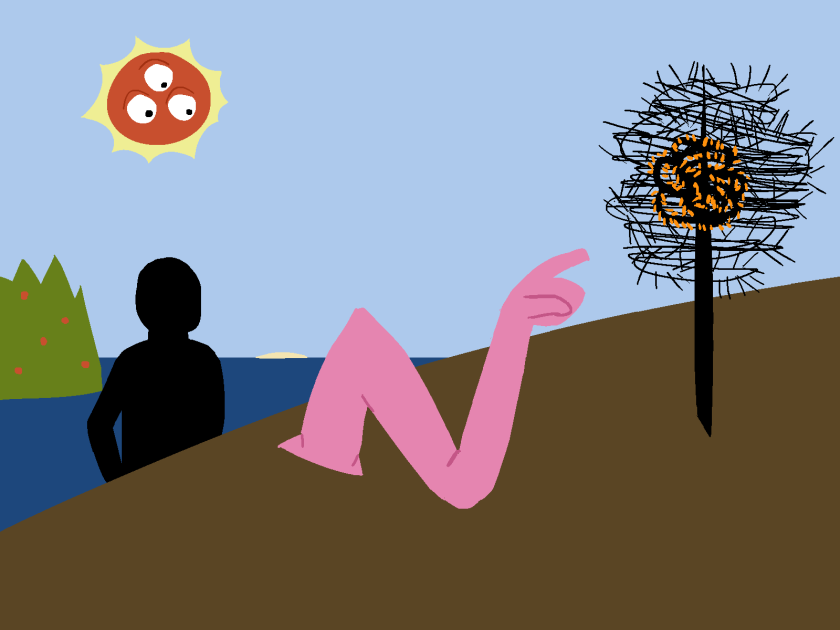 “This is the stuff.” The arm crawled to a black bush. It tried harvesting the fruits inside, but with just one eye on the back of its hand, it caught thorns between the teeth in its palm. “Ouch! I could blame the professor for giving this plant thorns, but I really should’ve planned this body better. Nemo, help me out.”

Nemo just inspected the bush. The thorns were inches long and barely distinguishable from the slender leaves. The thorns protected a black ball of long, tangled fruits. The fruits had tiny orange legs.

“Reach in,” said the arm. Nemo folded his arms defiantly. “Come on!” The palm’s mouth licked its lips. “Yum! Centipedes! Gotta eat centipedes! Akayama made these just for you!”

“Akayama?” Nemo recalled the giant bird making those sounds. He pointed to the sun.

The arm nodded by flapping its wrist. “Yep! That’s me up there! I’m the Hurricane Planet! I’m piloting this arm remotely.” The arm’s eyeball jiggled at the sun to transmit sensory data, and the sun’s eyes wiggled back instructions.

If the arm and the bird were both from the sun, then the arm must be another mentor. Nemo huffed and squinted at the centipedes in the bush. He clenched a fist.

Nemo thrust his hand into the bush and squealed as thorns ripped agonizing streaks in his forearm. He tore out the centipede-ball and dropped it.

“Hey! Take it easy! Don’t cry!” The arm pried a centipede from the ball. “Eat this. You’ll love it.” The hand’s mouth nibbled the bug like a parent urging a child to eat off a spoon. Nemo wiped his tears and rubbed his tender wounds. “Come on!” Nemo finally brought the centipede to his mouth. “My immortality is yours,” said the hand, “but your humanity is mine!”

Nemo bit off the centipede’s head. It was so bitter his face twisted, but he made himself chew. By the end, he was sobbing—but when he swallowed the last inch, his expression evaporated and his eyes unfocused.

The arm giggled and looked at the sun to transmit the image of their success. “The centipede is linking your mind to my planet. As I speak, your biology is warped into my brand of undying flesh.”

“Now I’m loading a pilot into your skull.” The arm’s eye watched Nemo’s mouth curl up at the corners. “Are you there, compatriot? Is our mission accomplished?”

“Here, take this. You’re better built to carry stuff.” The arm rolled the centipede-ball to Nemo’s knee. “Let’s make the other humans eat centipedes, too.” Nemo ignored the centipedes and picked up the arm. “Hey—leggo!” The arm flailed both double-jointed elbows. Nemo pulled the arm taught. “No! Stop! Are you a pilot or are you still Nemo? Either way, I’m your friend! I’m the Hurricane! I’m the sun! I’m—oh, God, please, no!”

Nemo bit off its thumb. Blood poured and he crunched bones. The hand’s four fingers scratched his face, so he munched its tail-end next.

Nemo yanked out a long bone, snapped it in half, and slurped up its marrow. He ate floppy boneless skin as easily as he’d eat a peach with no pit. When he reached an elbow he slurped its tendons, yanked out the next bone, and snapped it to drink its marrow, too. Soon only the hand remained.

Nemo swallowed the fingers whole, then chomped the palm. The eyeball burst in his teeth as it transmitted distress to the sun.

Nemo licked blood off his body until Nakayama approached from behind. “Oh no. Nemo!” She gasped at the blood around his mouth. “Did you eat a centipede? Please, tell me you didn’t!”

Nemo rolled the ball of centipedes toward her.

“No, no!” Nakayama took the centipedes. “I hid centipedes up here so you wouldn’t have one until I knew you were ready!”

Nemo showed her the snapped arm-bones. He pointed to the sun.

Nakayama’s beak became hooked like a hawk’s. “That cosmic scum! The Hurricane Planet went behind my back to give you immortality! Instead of just… usurping your body… as I advised…” Nakayama tilted her eyes with regret. “I’m sorry, Nemo. I should’ve been assimilated twenty years ago. I would’ve doomed just one Earth instead of building a whole new Earth to ruin.”

Nemo pat her lab-coat with sympathy.

“But how did you keep your mind? Why aren’t you possessed?” Nakayama stared at the furious sun. “To make you immortal, they probably stabilized your brain-matter. They couldn’t kick you out because they reinforced you first. Their fear of death preserved you.”

“I must return to the Hurricane. I don’t belong here—but you do, and I need you to promise: keep centipedes from the other islanders. The next person mind-linked to the Hurricane might not be so lucky as you.” She held the centipedes toward the capes and crossed her wings in an X. “Buu.” Nemo nodded. Nakayama extended the white point of one feather. “I’m bestowing a title upon you. When I built the Zephyrs, I meant to build many more, in many colors. When they agreed in intention they’d work together to grow stronger. I started with the leader, Zephyr-Blue.”

She marked Nemo’s forehead with her feather’s point.

“I christen you Virgil Blue, the island’s immutable backbone. You alone know the Hurricane’s treachery.”

“Virgil Blue?” Nemo felt his forehead. Embossed between his brows was a four-pronged Hurricane symbol—a swastika. “Virgil Blue.” He nodded.

“I don’t mean to send mixed messages, but this is my quickest way back.” Nakayama swallowed the ball of centipedes. “I couldn’t protect myself from the Hurricane, but I hope I can protect you.”

She spontaneously combusted. In an instant, only smoke remained. Nemo watched wind carry smoke to the island’s peak, where it lingered. 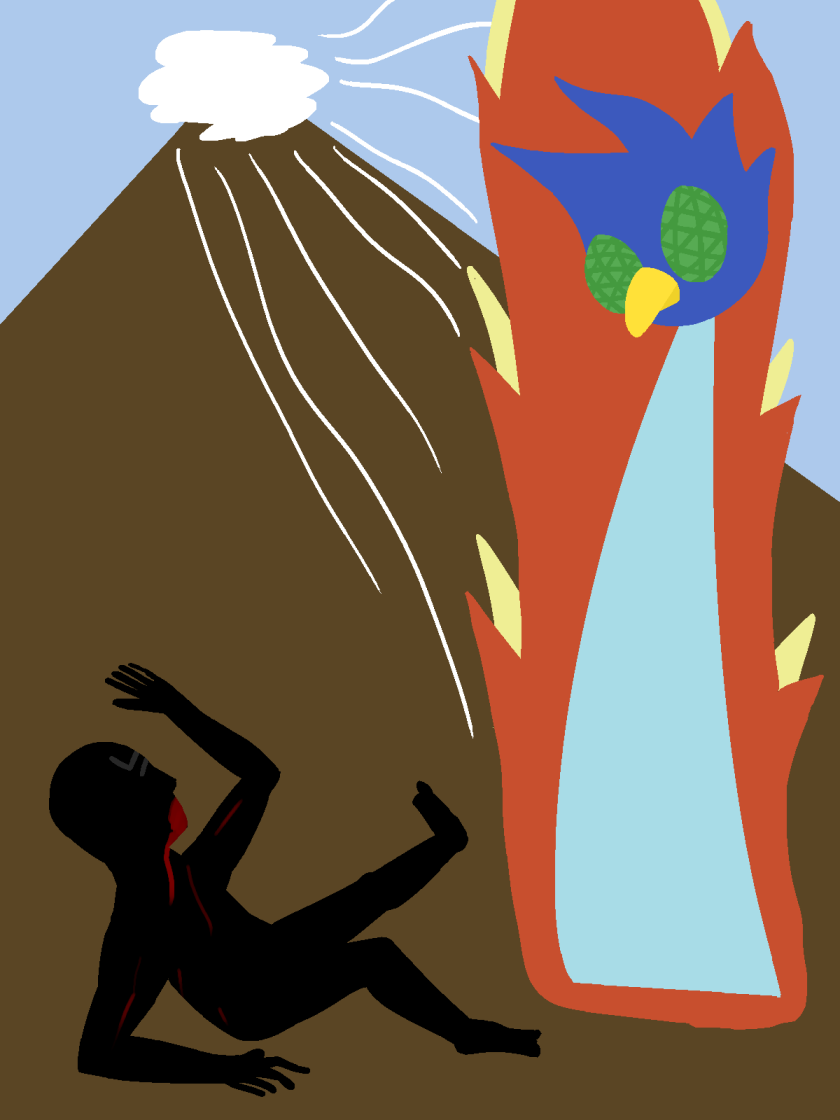