The desert sand was baked rust-colored. Mile-high dunes crawled over infinite plains. The mustard sky veiled a red mountain on a natural stone step so massive its hazy features extended into space.

A lone, cottony cloud zipped across the sky. It surveyed the desert, spilling vapor in its wake. It hovered over a particular valley between two dunes, apparently satisfied.

The cloud fell six feet left and six feet right, beginning a corkscrew descent. With each downward loop, it thickened and cooled. Soon the cloud was cold fog approaching the desert at incredible velocity.

On impact it popped like a bubble. Forty pounds of snow hit hot sand, jumping and steaming and clumping together.

“Oh! Ow, ow, ow!” The snow balanced like an egg to elevate its bulk above the sand. “Damn.” She shook legs from her snow nubs. With slender forelimbs, she brushed ice from her eyes. She sharpened claws in the sand and used them to sculpt her snout. Her crystal whiskers quivered in the dry air. She kicked frost from her hind feet, leaving a fluttery, airy tail behind her, and tiptoed to the shadow of a dune, where the sand was cooler.

After catching her breath, she dug at the dune, pausing only to eat the earthworms she uncovered. She finally excavated a cobblestone wall with a hinged panel. She sat before it, straightening her tail and biting sand from her fur.

Some time later, the hinged panel clicked. A sand-curtain fell to reveal the wall was part of a stone box.

“It’s about time.” She strutted to the box. “Come out already!”

The man in the box pushed the panel open. He sat crossed-legged in a cramped compartment, nude. He had short brown hair. Soot smeared his pale skin.

“I gotta fly you to the Mountain.” She put her front paws on the lip of the compartment to inspect him. She gagged. “Get a loincloth. It’s too early in the morning to look at monk junk.”

“And you’re a hobo,” said the snow-white fox. “If you think you’re attaining Zephyrhood naked and sooty, you got another think coming.”

“Something’s wrong,” said the monk. “I thought I’d wake on the Mountain greeted by the Zephyrs themselves.”

“Well, the Zephyrs sent me. Who sent you?”

The fox’s tail fell behind her. She returned to all fours and stared demurely at the sand. “You’re one of Virgil Blue’s?”

The monk nodded. He pulled himself from the stone box, pouring soot on the sand. “Hot today, huh?”

The monk brushed ash from his belly. He held a folded washcloth. “If we’re not on the Mountain, where are we?”

“The Deserts of Anihilato,” said the fox, poised rigidly, “where lost souls fall into Nihilism’s grasp. We should leave before it finds us.”

“I’m not worried about Anihilato.” He pulled the washcloth around his waist and tied it into a loincloth. “Is this better?”

“Sorry for my disrespect, sir,” said the fox. “I usually reign in regular-old lost souls, like earthworms and stuff. The Mountain greets guests like you themselves.”

“To be honest, I’m relieved,” he said. “I’ve lived in a monastery for seven years. I’ve had enough of Zephyrs and Virgils. What’s your name?”

“Dainty! No wonder the Mountain sent me!” Faith the fox leapt and hovered on water-vapor. “Gosh, I didn’t recognize you covered in soot. Dainty Jones… Let’s talk on our way to the Mountain.”

Dan looked to the red mountain sitting on a plateau like a throne. His eyes traced the impossible heights. “Is Beatrice there?”

Faith sighed. “If she is, I haven’t seen her.” She dropped from the air to stand at Dan’s feet. “You’re filthy, Dainty. Are you sure you’re okay?”

Dan swallowed and stared at the yellow sky. His hands twitched. “If Beatrice isn’t in the Mountain, maybe she was claimed by the King of Dust.”

“I hope not. Anihilato’s such an ass.”

Faith shook. “The last time I met Anihilato, it tried to grab me.”

“Then I definitely want to meet. It lives underground, right?”

“You can go alone,” she said. “I don’t wanna see that thing again.”

“I’ll protect you, I promise,” said Dan. “I just want to make sure Beatrice is alright. I’ve even brought Anihilato an offering.” Dan reached into the furnace for the cricket. It was a tan smokestack with ten black eyes around its head. “A cricket from Virgil Blue. You can help us smoke it.”

“Well… okay. But only because there’s nothing but cockroaches over here. I can’t stand it!” Faith led Dan over a dune. “Light it up! We’ll get bug-eyed on the way.”

“I didn’t bring a lighter. Let’s bum one from the King of Dust.” 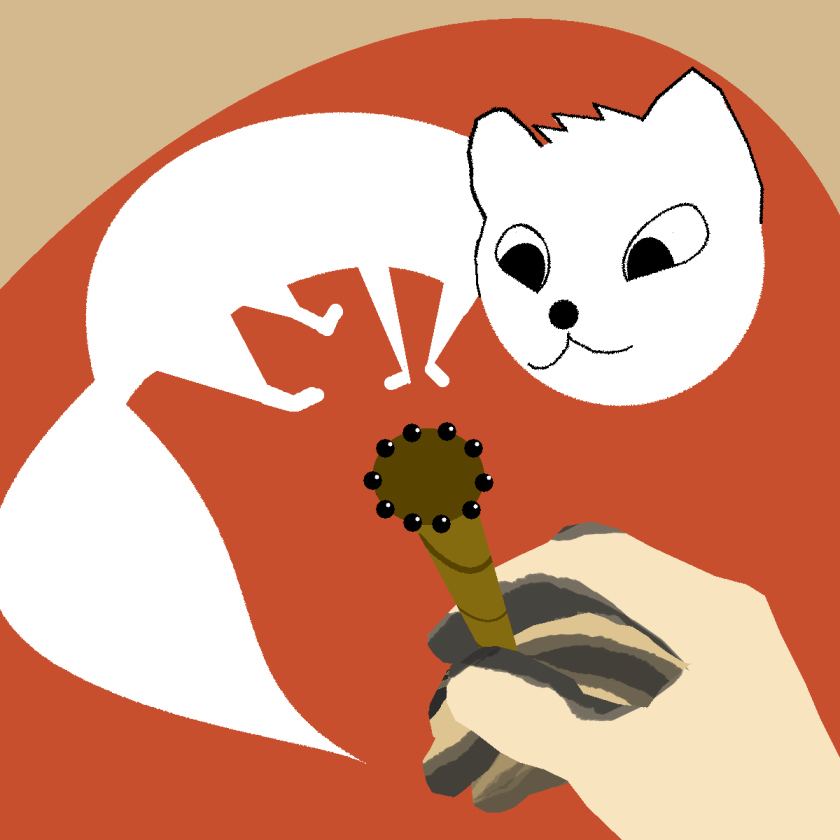