As she swam the oceans of the watery world, Akayama wondered if she was alone in her skull. Maybe the Hurricane sanctioned her actions from inside her own brain. She hoped only to accomplish the task she’d assigned herself: opening undersea magma-vents to create landmass.

Since the Hurricane had warped her biology, she found herself capable of conscious change at the cellular level. Currently she was thirty meters long and skinny like a snake. She’d flattened her feathers into scales like an aquatic anaconda. Her lab-coat clung to her narrow shoulders while her stretched arms pried stones to expose molten magma.

She spent days underwater before deciding to rest. She became buoyant and floated to the surface. She massaged her gills flush against her neck. Her lungs reopened. She fought for breath.

In the west was a faux sunset. The impostor sun was her Hurricane Planet irradiating the oceans. Akayama felt its thin chemical rain seeding the seas with genetic material. She wondered how the copy of her mind left aboard the planet was faring.

Akayama slept and melted into an acre of filmy liquid buffeted by waves.

In the morning she collected in her lab-coat. She filled her sleeves with pseudopods which became arms. She tread water with new legs.

Her magma-vents had spawned three islands. She swam to the closest, the smallest, and shambled ashore like an octopus. The island was sandy and barren. Surely nothing could live here. 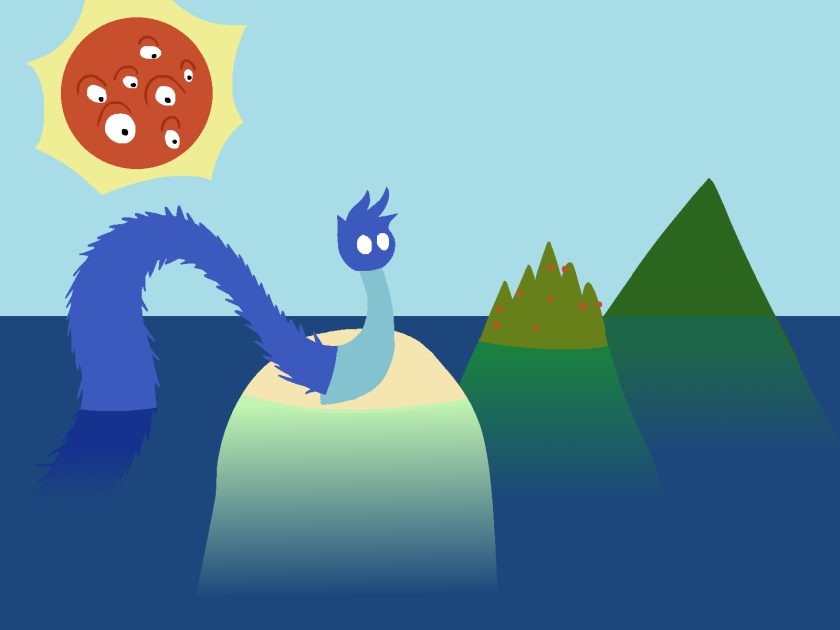 She heard a chirp.

She enlarged her eyeballs to inspect the sand and saw a small hopping insect. She flattened her left arm to scoop it up. “What are you supposed to be?”

The insect chirped by shuffling its wings.

“You look like a skinny cockroach,” said Akayama. “How disgusting. The Hurricane is cutting corners to generate animal life. I’ll call you a cricket.” She slipped the insect and sand up her sleeve. She shook her other sleeve, and out fell fertile soil with the insect planted eyes-down. “I’ve made you a radially symmetrical plant. Now you’re far more stable.”

She ambled about the island planting copies of the cricket she had made. When she needed more soil, she scooped sand into her sleeves and converted it to loam with nuclear processes.

This worked until she uncovered a human body. “Augh!”

“Aaaugh!” The nude man hiding in the sand was more afraid than she was. He kicked and clawed and scrambled away. “Aaaugh!”

“Hey! It’s okay!” Akayama bounded after him. The man had dark skin, darker than black. His bony build would stand six feet tall if he weren’t crawling in terror. “I’m here for you! I’m here for you!”

“Aaaugh!” He was cornered on the coast. The man flipped on his back and raised his arms to protect himself. “Aaaugh!”

“Hold on, hold on.” She frayed her scales back into feathers and molded her arms roughly humanoid. “Um.” She couldn’t recall how many fingers humans had. “Show me your hands.”

The man recoiled when she took his arm as if to read his palm.

“Only five? I have too many! No wonder you were scared.” She ate her extra fingers like soft cake. “There we go. Shake.” She shook the man’s hand. “Yoroshiku ne. Akayama dawa. Do you have a name?”

“Name?” repeated the man. He had wide-set eyes with black irises. “Name?”

Akayama thought. “To make these islands, I spent days at the bottom of the sea. Taking this as inspiration, I name you Nemo.”

“Precisely.” Akayama pulled Nemo to his feet. “Are you alone?” Nemo didn’t understand, so she combed the island. “Why did the Hurricane make you after I specifically said we’d work our way up to advanced lifeforms? I can’t imagine what awful things it did to its Akayama to coerce your creation.” The island was combed and she found no more men. “This island is too small to house a human comfortably. Let me take you to that larger one with the trees.”

Akayama folded herself into a boat. Nemo stepped shakily aboard her back, and after she crossed the harsh surf, he was glad to disembark on the second island. Nemo walked through the trees staring up at their canopies in awe.

“You have food, at least.” Akayama stretched her whole body to pull fruit from the treetops. Bananas, apples, oranges, pomegranates, and peaches grew side-by-side. She gave their fruits to Nemo. “Not all these trees can survive in this climate. Enjoy them while they last.”

Nemo couldn’t hold all the fruits at once. He bit a banana through its peel. When he saw soft flesh underneath, he understood the nature of the fruit and peeled it. He experimented with each fruit while Akayama surveyed the island for dangerous species. The only animals she found were tiny flightless birds in a variety of colors.

“…Hey!” She knocked a tiny flightless bird out of Nemo’s hands before he ate it alive. “Don’t eat these! These aren’t fruit.” Nemo stared blankly, so she sketched the bird in the sand. “Buu.” She crossed her arms in an X. “Buu.” She swept the bird-sketch away. “Got it?”

Akayama led him back to the coast to show him the Hurricane Planet shining like the sun. “That object and I are separate but of the same form. You come from there as well. I must go but I will return. Let me sample your DNA.”

She speared him in the ribs with the white point of a feather. Nemo shouted, but the feather left no wound. Its point was thinner than a syringe.

With that, her body flattened so wide, tall, and thin that the wind lifted her. Nemo watched her float away like a jellyfish. 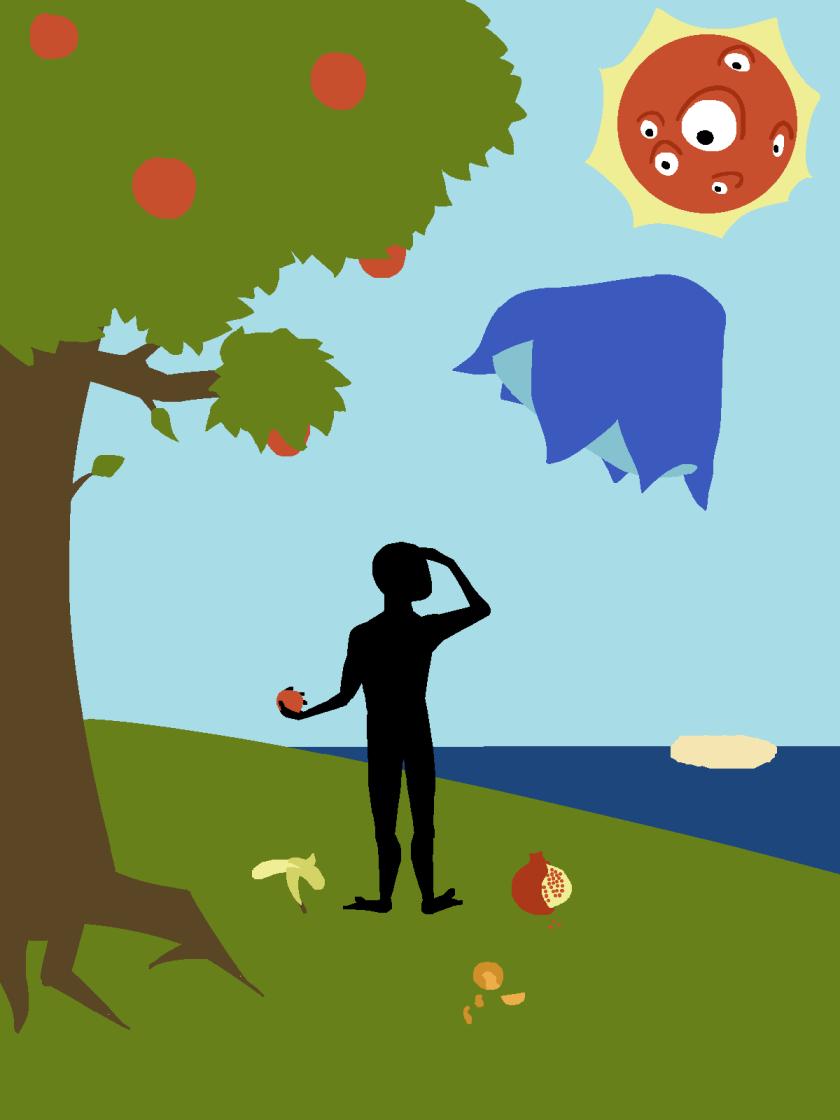