In Chapter R. The Wheel of Fortune Commander Lucille’s Galaxy Zephyr fires its own heart at the Enemy Hurricane. Besides being an oblique reference to Moby Dick* this initiates the rest of Akayama DanJay‘s story. The heart injures the Enemy Hurricane and becomes a Wheel which Akayama claims is a torus, a donut-shape.

In this donut, Professor Akayama sifts through the ashes of Earth to reconstruct its population. She’s not totally clear about how the process will work (which makes it easier for me to bullshit about it with plausible deniability) but she mentions principal components. Instead of recreating Earth’s population all at once, she plans to generate a few “orthogonal unit-vectors” which can be combined into any specimen from Earth.

This Wikipedia article provides an example of principal component analysis pictured below. Notice the gray data-points are smeared diagonally; describing the position of points using typical x,y coordinates would be unnatural. Instead we find two arrows (vectors) at right angles (orthogonal) which more naturally express the spread of data. The longer arrow points in the direction of maximum variation so that if we were limited to only one principal component, we would know which best exemplifies the diversity in the data.

A more visually interesting example is found in this paper from Nicolas Le Bihan and Stephen J. Sangwine where a single image is broken into principal components and reconstructed. The original image is this mandrill (a glorified baboon): 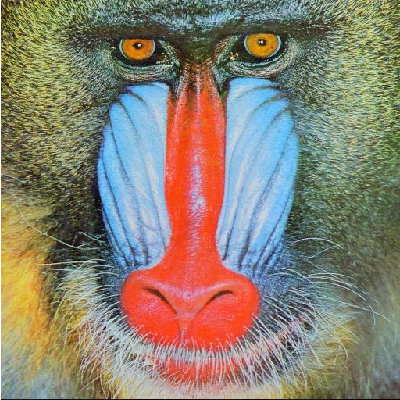 If we’re limited to just one principal component, the mandrill looks like this:

Essentially there’s one row of pixels which best represents the diversity of colors in the image and their placement. We see horizontal bands made by scaling that row of pixels, but aside from this scaling, each row is the same. If we use three principal components, we find the following:

If, instead of a baboon photo, we wanted to reconstruct the population of Earth, we might imagine making a collection of people-like-entities. For any person on Earth, we’d add/subtract scalar multiples of these principal-component-people to approximate that person.

That’s why Professor Akayama takes her role as guardian of the afterlife. She’s looking for outputs of her machine-learning process, choosing principal components to reconstruct Earth’s population. When she eats worms, she’s gathering data and refining those components as much as possible. Apparently one of those components was Beatrice.

Philosophically speaking, even if linear combinations of principal components accurately resembled Earth’s population to an arbitrary degree, could that really be called Earth’s original population? As a trivialist I’d say sure, why not. In the fiction of Akayama DanJay Professor Akayama is the universe’s leading expert in mind-merging; I’d trust no one else to reassemble my phenomenology—my notion of consciousness and personal experience.

But we’ll just have to see how it turns out. See you next week.

*”He piled upon the whale’s white hump the sum of all the general rage and hate felt by his whole race from Adam down; and then, as if his chest had been a mortar, he burst his hot heart’s shell upon it.”

You might know the Star Trek version of the quote better: “And he piled upon the whale’s white hump the sum of all the rage and hate felt by his whole race. If his chest had been a cannon, he would have shot his heart upon it.”

Other noteworthy references I try to make in this section:

Lucille says “War’s all I’m good at!” which I want to echo demon Moloc’s statement in Paradise Lost, “My sentence is for open Warr. Of wiles more unexpert, I boast not.” In inverting elements of Paradise Lost I want Lucille to basically be Satan aligned alongside God (Akayama) against Hell (the human hubris of the Enemy Hurricane). Rolling lines from demons into her character feels appropriate.

The Galaxy Zephyr’s heart boils “so violently the bursting bubbles howled like hounds eager to slip for war.” Besides the obvious relation to “let slip the dogs of war” from Shakespeare’s Julius Caesar, I want this to echo the character Sin in Paradise Lost. Sin was born from Satan and gives birth to Death; her labor is described thusly:

…about her middle round
A cry of Hell Hounds never ceasing bark’d
With wide Cerberian mouths full loud, and rung [ 655 ]
A hideous Peal: yet, when they list, would creep,
If aught disturb’d thir noyse, into her woomb,
And kennel there, yet there still bark’d and howl’d
Within unseen…

“…my womb
Pregnant by thee, and now excessive grown
Prodigious motion felt and rueful throes. [ 780 ]
At last this odious offspring whom thou seest
Thine own begotten, breaking violent way
Tore through my entrails, that with fear and pain
Distorted, all my nether shape thus grew
Transform’d: but he my inbred enemie [ 785 ]
Forth issu’d, brandishing his fatal Dart
Made to destroy: I fled, and cry’d out Death;
Hell trembl’d at the hideous Name, and sigh’d
From all her Caves, and back resounded Death.”

While Sin gives birth to Death, the Galaxy Zephyr uses its “hounds” to recreate Earth’s population.

Lucille tells the Enemy Hurricane “I introduced you to pain!” In Paradise Lost Satan first feels pain at the sword of archangel Michael when Michael cuts him in half:

with swift wheele reverse, deep entring shar’d
All his right side; then Satan first knew pain,
And writh’ d him to and fro convolv’d

So Lucille isn’t just associated with demons; she represents angels, too, albeit in a bloodthirsty way.

Lastly, Lucille calls her Wheel the wheel of fortune. This isn’t a reference to the game-show, but to Dante’s Inferno. Says Brown University:

Dante merges the pagan and Christian beliefs in his scheme of the universe by elevating [Fortune] to the “rank” of a Divine Intelligence, God’s “general minister and guide,” who controls the empty wealth and splendor of the world of men. She is inscrutable, swift and powerful within her licensed limits. Though often slandered, she dwells above in bliss, untroubled.

“Your wisdom cannot withstand her: she foresees, judges, and pursues her reign, as theirs the other gods. Her changes know no truce. Necessity compels her to be swift, so fast do men come to their turns. This is she who is much reviled even by those who ought to praise her, but do wrongfully blame her and defame her. But she is blest and does not hear it. Happy with the other primal creatures she turns her sphere and rejoices in her bliss” (Inferno, VII.85-96).

The Enemy Hurricane will find no leniency from Lucille. To her, this isn’t a fight for the sake of Earth. She’s never been to Earth and couldn’t care less for it. Akayama’s recreation of Earth, the Wheel, is merely Lucille’s weapon. Ironically, that’s exactly what Earth needs at this point in the story.