Jay screamed in an arc over the dunes. The desert below was wrinkled like an old pink peach. The sky above was tinted honey-gold as he neared the zenith of his trajectory. The pink and gold spun so quickly he saw only whirling apricot. He shut his eyes and hoped his death would be swift. 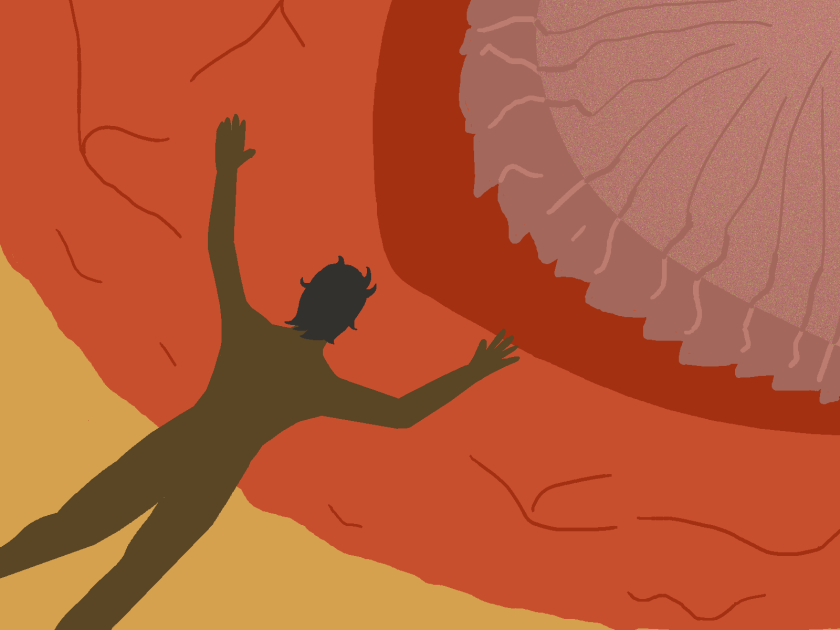 A sonic boom opened his eyes. The bird zipped so close it caught Jay in its exhaust. Jay coughed and choked on the frozen fog. Through panic, Jay noted how lucky he’d be to die cold in a scorching desert. Anyone else would die of heatstroke or thirst, but he’d shatter on the red mountain like ice. An interesting first!

The bird landed in a foggy cloud. As Jay fell the final forty feet, he felt the fog compress beneath him like cream. The cold mist rest him on the mountainside.

Before Jay could catch his breath, the bird snared his waist with a tentacle. “I am the Heart of the Mountain!” It lifted Jay to show him the caves pockmarking the mountainside. “Today you attain Zephyrhood!”

It tried to cram Jay into a cave. Jay braced his limbs against the hole’s rocky mouth. “No! Stop! Please!”

“The Chain is pulled and the Wheel spins!” repeated the Heart of the Mountain. It mushed Jay against another hole. “Your arrival was fated! Enter!”

The caves were so dark Jay could not guess how deep they ran. He beat the tentacle with his fist. “Let me go! Why am I destined? What did I do?”

“You arrived.” The Heart blinked its green compound eyes. “Into the Mountain you go, toward destiny!”

Jay struck the tentacle with a red rock. Four suckers released, and Jay squirmed from its grasp. The hard terrain hurt his feet as he ran.

The tentacle swiped at him but he leapt into lingering clouds of exhaust. He ran blind, only hoping not to fall into a hole.

The bird beat its wings to blast the clouds away. Jay sprinted to stay with the flying fog.

He tripped. He rolled and scrambled to his feet. His protective fog had fled. “Please, no!”

The fox’s ears lay flat. ” ‘Where am I?’ is more like it.” From the red mountain she and Jay looked down on mile-high dunes. “How’d I get here?”

“This is the Mountain. I am its Heart.” From each sleeve, the bird extended five blue arms of normal thickness but five times normal length. They plucked the fox by the scruff of her neck and pinned Jay to the ground. “Which of you is the prophesied Zephyr?” 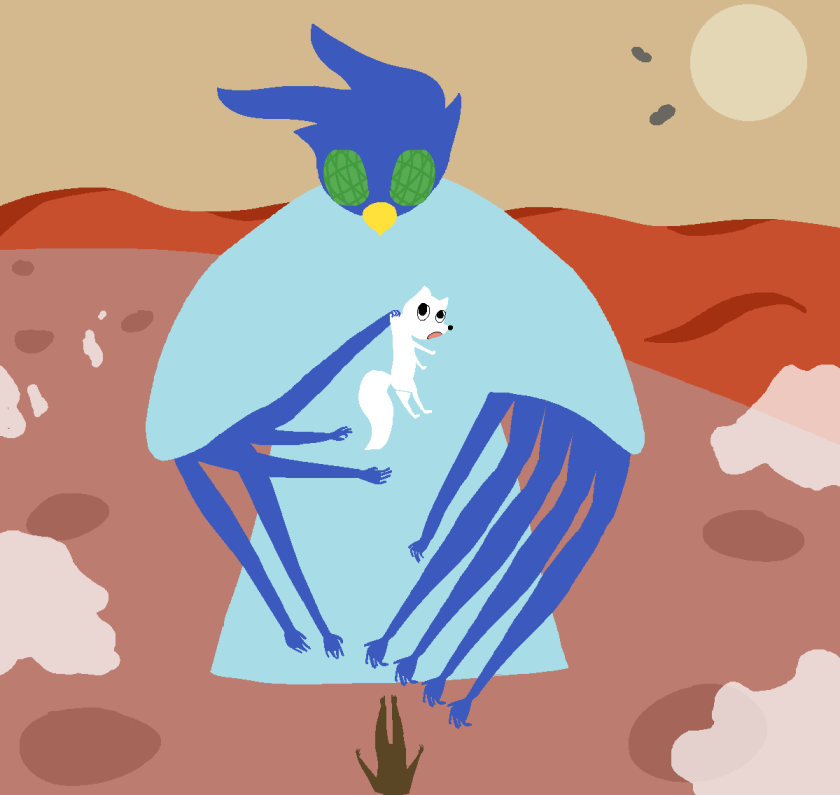 “Hey! Put me down!” The fox couldn’t shake the grip on her neck. “Help!” Her body turned to fine snow. The Heart’s hands slipped through her. She fell in a pile beside Jay.

“Time runs short! Which of you is the Zephyr? Shall I bury you both?” The Heart scooped the snow next to Jay and compressed them both in place with all ten hands. “What are your names?”

“How did you get here?” demanded the bird.

The Mountain’s Heart blinked. The facets of its compound eyes disbanded and most of them retreated into the bird’s skull. The remaining eyes scrutinized them both. “Centipede-powder? From whom?”

“Virgil Blue,” said Faith, “by way of Virgil Skyy, taken under the supervision of Virgil Orange.”

The Heart relieved pressure from its palms. Jay squirmed away, but Faith couldn’t control her snow-body. “That explains you two,” said the Heart, “but the Chain was pulled and a Zephyr must arrive! Where is it?”

“How should we know?” Jay stood and brushed dust from his body. He crossed his arms over his chest. “I’m not even sure what a Zephyr is!”

“Really?” The bird retrieved its arms and became a sky-blue cloth cone, like a tepee. It regenerated its compound eyes. “We’re all Zephyrs, one way or another. But for this Zephyr, the Chain was pulled! It must arrive as surely as the Wheel spins! To join all Zephyrs in the Mountain!”

“Virgil Skyy didn’t even mention Zephyrs!” Faith grew a slender limb and used it to shape a snout on her face. “He did mention mountains, though.”

A sound like a gong bowled over Faith and Jay. The roar ruffled feathers on the Heart’s head. It cast its green gaze to the sky. “Oh, thank goodness! I worried it would be subtle.”