Professor Akayama unfurled both wings and blasted steam from her lab-coat to sail light-years from the Galaxy Zephyr. As she flew, she siphoned the Zephyr’s mass until it was merely its original robots, and her wingspan could have enveloped the observable universe. On her wings she grew eye-spots which signaled a final message to the Enemy Hurricane’s scattered humanoid particulates.

“I’m sorry,” she signaled. “I wouldn’t wish this on anyone. But did you really think this could end any other way?”

The Enemy Hurricane’s particles signaled back, “What did you do?”

“Space-time is expanding,” signaled Akayama. “Soon it will expand so quickly that nothing will ever travel faster than the speed of light in vacuum. You’ll drift farther and farther, faster and faster, until after billions of years, your images will be Doppler-shifted beyond ultra-violet, and there’s no trace of your existence. By then, maybe even our memory of you will fade.”

“We’ll recombine,” signaled the Enemy Hurricane. “We’ll join together once more, and then—”

“No you won’t,” signaled Akayama. “Just as you drift away from us, you drift away from each other. Soon your individual bodies with be sheared apart.” As she signaled this, the Enemy Hurricane felt the shearing force. Expanding space-time smeared their humanoid forms into snakes and salamanders. Stretching opened wounds which bled teeth. “Eons hence, your subatomic particles will be torn asunder.”

“The same will happen to you and your people!”

“Nope. We’ll die long before then. It was your desire to be permanent, not ours. Be careful what you wish for. Although…” Akayama scratched under her beak. “When you obliterated Lucille’s generous suicide-pill, you probably absorbed its self-destruct sequence wirelessly. You can cast off this mortal coil any time you like.”

“Tell me,” she signaled, “do you fear God?” She received no answer. “If there ever comes a time you could be called dead, Lucifer will drag you to his darkest pit. You might shout to God for mercy—and I will look down in pity and remind you, you had your chance.” Akayama shrugged. “Oh, I almost forgot.”

She shook one wing and a tiny green speck fell from her sleeve onto her longest feather.

“Although you’re suffering, o Hurricane, understand that your hundred pilots are safe and sound. I included them in the algorithm reducing Earth to its most basic forms. I’ve met humans whose compassion extended to every sentient being. Anihilato’s complicated form reached every corner of humanity’s most vile crevices. But you?”

She raised the tiny green speck. It was a frog. It was almost cute.

The Enemy Hurricane didn’t respond. Maybe it was too far away, or maybe its mind was clouded with agony. 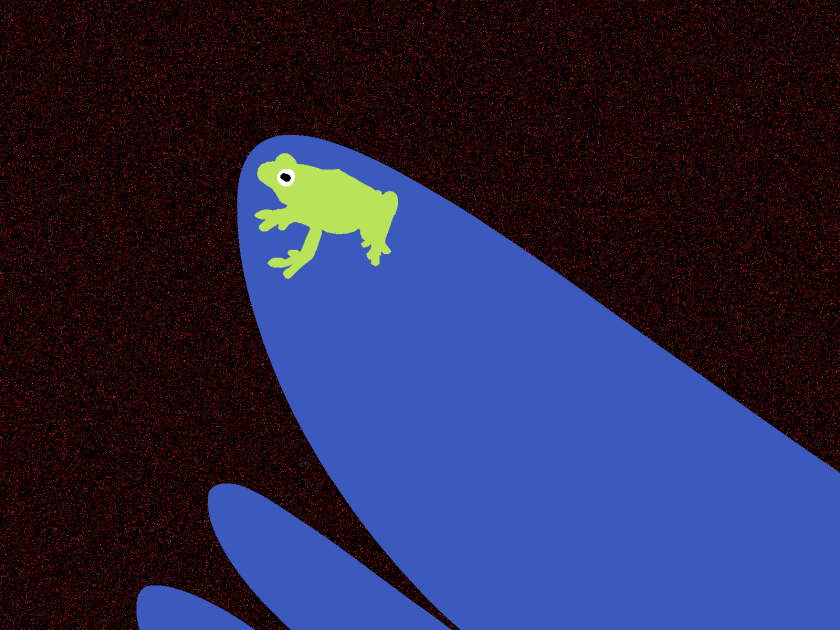 Charlie pointed to his main monitor. “Look! The professor’s coming back!”

Lucille folded her arms and tssk’d. “She didn’t even ask before she stole my robot’s mass. We’re barely a kilometer tall.”

“She gave you that mass,” chided Daisuke, “and she knows what she’s doing.”

The ten thousand pilots watched Professor Akayama shrink as she left galaxy-clusters in her wake. She popped off her wings and they decomposed into dark matter. Her compound eyes disintegrated and every facet became a gargantuan star.

“Better than that!” Eisu scrolled through historical-records on his monitors. “The stars are back where they used to be a century ago!”

The whole crew gasped as Akayama shed her robe and it condensed into the Milky Way’s celestial belt. She expelled the sun and moon from her chest. The combined Zephyr landed gently on the moon, beside the lunar base.

Akayama’s body shrank and shrank, leaving each planet of the solar system behind her. She deposited Earth last. Lucille stared agape at Earth’s gleaming oceans. She eventually regained composure and pulled her monitors close. “Zoom in! Start scanning! Are there any signs of life?”

ZAB responded in its computerized monotone. “Only one. Akayama.” The monitor magnified the image of Earth and zoomed in on the fertile crescent. Buildings, roads, and infrastructure were present, but no humans were to be seen. Only Akayama herself stood tall over the landscape, almost six hundred billion tons of colossal bird-thing.

“She’s—” Fumiko covered her mouth. “Is this appropriate to watch?”

Gas streamed from the egg’s cracks and spread over Earth in seconds. “Those are all Earth’s single-celled organisms,” said ZAB. The cracks widened and dark rivers poured. “The insects and small creatures.” The cracks widened and torrents surged. Lucille didn’t need ZAB to tell her these were the larger species. Elephants, tigers, wolves, and every other manner of animal ran for their habitats. Even sea-creatures rolled across the deserts, and she understood that Akayama had scientifically bolstered these specimens to make their journeys home. 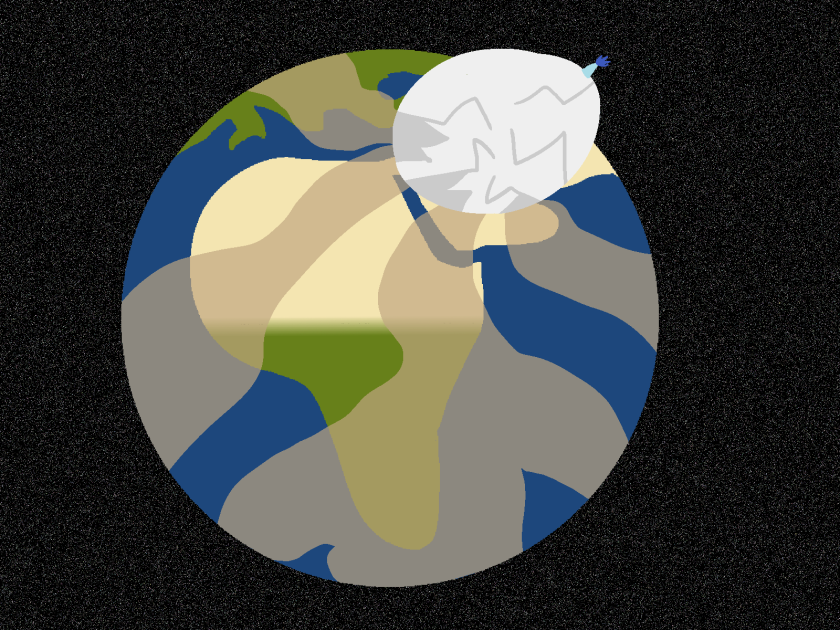 “Where are the people?” asked Daisuke.

“Look!” Charlie made the combined Zephyr’s right arm point to Akayama. Her feathers fell one by one, and each became a human being. The feathers drifted and tumbled with the wind to deposit each person where they belonged. With each lost feather, the bird-thing’s body shrank.

ZAB clicked through thousands of calculations. “They’re all there,” it said. “Everyone—no, everything is accounted for, down to the last microbe.”

Lucille leaned away from her monitor’s camera so her crew couldn’t see her wipe tears from her face. “Yappari sou da. Akayama Hakase.”

The monitor zoomed in. Professor Akayama’s human body lay nude and unconscious in the sand before the body of the bird-thing, about twelve feet tall. It loomed motionless above her.

The crew of the combined Zephyr watched breathlessly as Akayama’s human form stirred awake. She felt her own body before standing and noticing the bird-thing before her. She cringed in fear, then reached out to touch its featherless flesh. 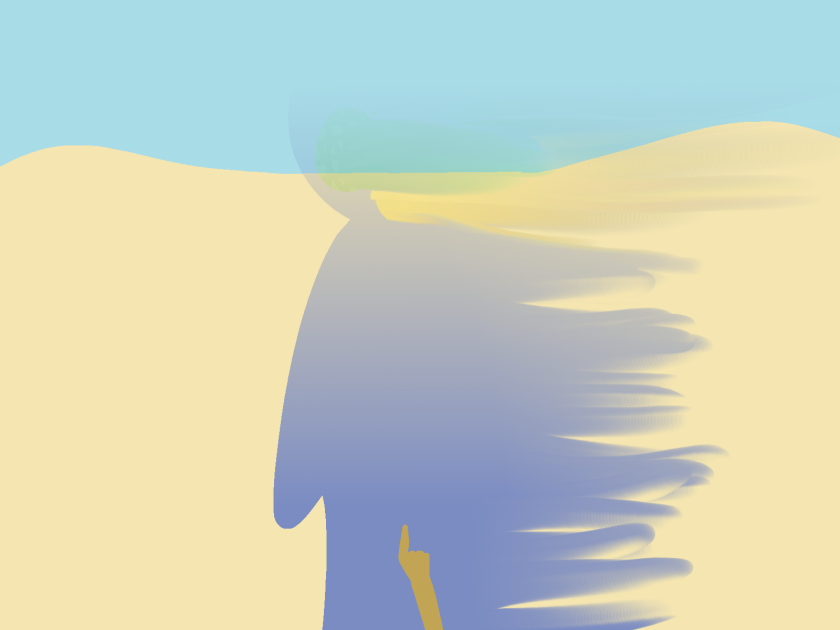 At a touch, it disintegrated. It just blew away in the breeze. It left only a fresh white lab-coat on the sand. Akayama put it on. She pat her pockets and found a bug-stick and a lighter. She indulged in a good smoke.