In J2: Sheridan Jay drags Dan to the town in Wyoming where Faith first met Virgil Blue. Faith’s Uncle Bob asks Jay for a frozen-slush-drink-thingie from a gas-station. Jay brings him a blue one instead of an orange one.

I don’t pay conscious attention to details like color when I write my first drafts. I try to use a variety, but I don’t go out of my way to use colors with special meaning. Meaning is a second-draft concern, when I can recall all the colors I intend to use, and mix them and match them.

Akayama DanJay is about the unity of opposites. Blue and orange are famously opposite; movie posters use blue/orange color contrast to get people’s attention all the time. We often think blue is the opposite of red, but most color wheels disagree.

Dan wears orange robes and orange shirts (he briefly wears blue in mourning after his father’s death). He meets Jango’s Virgil Blue, who wears blue (obviously). After Virgil Blue sends him to the afterlife and Dan meets Anihilato, Dan becomes Jay (or Jillian), who is associated with the color purple. This symbolizes Dan’s internalization of Virgil Blue’s lessons: orange and blue make grayish, but it’s close enough to purple (blue and red) to get the point across. Even though Jay does not totally remember his past life, its indelible impression remains.

Leo wears red. Red is close to orange, and red is associated with strong emotion. So, Leo is shown to be angry and passionate and irrational, and Dan is shown to be not much better. Jay’s redness is tempered by the wisdom of blue.

The Heart of the Mountain is also blue, but it shows the different kinds of blue available. There’s sky-blue (which Jango wears) and dark blue (which the previous Virgil Blue wears).

The Heart’s dark blue parts are harsh: they are binding tentacles and limbs. The sky-blue robes hide the harsh reality. Jango’s Virgil Blue is a kinder version of the Virgil Blue before him, who is cloaked in navy.

The Heart also has yellow and green. Yellow reminds me of the sourness of lemons and the painful brightness of the sun; the Heart’s hard, sharp beak is yellow. Yellow and blue make green, so the Heart’s green eyes combine an unpleasant burn with wisdom and understanding. God’s glare of judgement is penetrating and scrutinizing, but compassionate and accepting.

Faith is white, symbolizing purity. Whatever happens to Faith she escapes unstained. Beatrice is also light-colored, but her texture is cloudy. She’s more distant and reserved, but just as pure as Faith, if not purer. Combined with the rest of the Beatific imagery, we understand Beatrice to be a figure of supreme spiritual power in the universe of Akayama DanJay. But she is clouded and opaque; none may view her from outside. Dan’s only path to Beatrice is through Faith.

Inside the Mountain, the yellow and blue skies mix into green.

In LLS-TA, there are robots of every solid color, just like Sheridanian Big Birds. 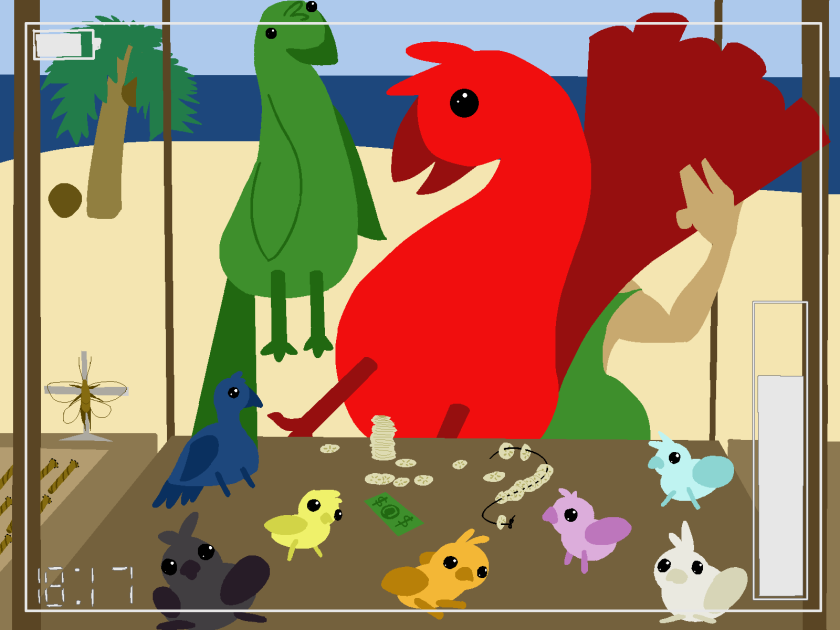 I hope this color-commentary seems intriguing, because I’m not totally sure where I’m going with it. I just want to make sure colors have enough meaning to allow for some apotheosis by the end.

That’s it for this week. Keep eating your worms!

Next Section
Table of Contents