“Inside the red mountain it buzzed like hornets and locusts. Everything was green.” Dan struggled to hold his head off the bar. “The white wing became a path to the green distance. I tried to walk the path but the green sky flickered yellow and blue. The noise was so loud I covered my ears—my elbows felt wind pushing back on my left and forward on my right.

“The wind was spinning me. I walked against the wind and the the green sky separated into yellow and blue like videotape of a propeller syncing with the frame-rate. The desert’s yellow sky was above me and Earth’s blue sky was below me.” Jay thought. “So the wing was a spinning cylinder and you counteracted the spin by walking at an angle?”

“Or maybe the sky was spinning,” Dan murmured. “I don’t want to think about it.

“On the green horizon between yellow and blue, I saw white light like the sun. As I approached it, the buzzing died down. But the path veered away! I left the sun behind and the buzzing returned.

“Another white path stuck out of mine like this.” Dan shook a hand diagonally. “Next thing I knew I was walking up that new path directly toward the sun. The buzzing died down again.

“Objects orbited the sun. Their periodic shadows made it look like the sun had a heartbeat. I couldn’t tell how big the objects were, so I was surprised when one smashed on my skull. It was an egg. There was a blue fledgling inside. The fledgling’s face held a beady eye on one side and a hundred human teeth on the other. I couldn’t bring myself look away from its gaze or even wipe yolk from my face.

“The yolk slid off my skin. The white shell, scattered in three dimensions, scattered back around the bird. The egg kept orbiting like nothing happened. I kept walking to the sun.

“Just before I stepped into the fire I heard a voice. The big blue bird stood behind me and restrained me in its wings.

“The bird told me that inside the red mountain you see all of reality at once. The sun in the center is the origin of all things—the `indefatigable meristem’ they called it—and if I’d touched it my sentience would’ve scattered across the cosmos. Somehow I understood reality’s shape is an infinite-dimensional torus, circles swept in circles swept in circles and so on.

“When I turned to see the bird, I woke drooling on my couch. My throat felt painful and raw so I drank six glasses of orange-juice and puked. I cleaned the bong for an hour. It wasn’t dirty,” Dan slurred, “I just felt dirty inside.”

Dan slumped over the bar. Jay capped his pen and closed his notepad. “Dan, that’s fascinating. When Faith and I smoked centipede we had a similar experience—and that experience is an awful lot like parts of that anime, LuLu’s.”

“Naturally. The mechanisms of cognition are fundamentally similar from person to person.” The sentence was almost incomprehensible through Dan’s drunken slur. “We have different personalities, but underneath, everyone is alone in a desert. Maybe the person who made the anime was a bug-head who got the idea tripping. I don’t care. I haven’t smoked centipede since and I never will again.”

Jay pat him on the back. “You don’t have to. I won’t even ask you to come to Sheridan if you don’t want to.”

“Take me to Sheridan, Jay. Please.”

“But… tell me… honestly… When you and Faith came to my apartment to smoke centipede, was Beatrice actually on-call at the hospital? Or did you three conspire to give her that excuse in case I made her uncomfortable?” Jay didn’t answer. “That’s what I thought.” Dan clenched his eyes shut. “I’m hopeless. Hopeless!”

Uncle Featherway entered from Faith’s funeral. Jay waved him to a stool. 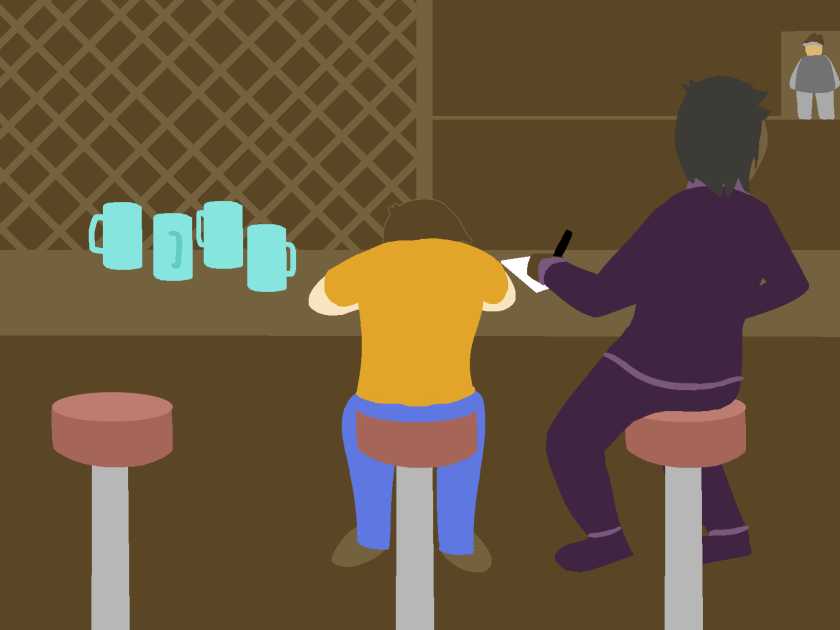