Sheridan’s main island wore a skirt of steep capes. Its only stretch of coast welcomed the ferry to a lonely dock. Giant birds floated in the shallows and lounged on the sandy beach. “This beach is a sacred spot in the birds’ life-cycle,” said Michael. “All fledglings are born to the matriarch guarded by Virgil Green’s congregation; only the dedicated matriarch can lay fertilized eggs. When they grow to human-height, they swim to this shore. When they tire of play, they waddle the trail which winds up the island until old age takes them. Monks mark the height of each bird’s death with a porcelain egg. Matriarchs get a porcelain egg with sacred decoration.”

Jay noticed half the birds were almost ten feet tall while the other half were half the height. The shorter birds dragged flowing tail-feathers behind them. Jay guessed the larger birds were egg-layers and the smaller birds with tail-feathers were their mates.

A mate spread their tail like a flaming curtain. An egg-layer looked coyly over their shoulder. Eva covered Lilly’s eyes. Leo snickered as the squawking birds mounted each other on the sand. On cue, more birds paired off, some mate-to-mate, some egg-layer-to-egg-layer. Leo stopped laughing, but made disgusted effort to watch the matched pairs proceed.

“They mate for pleasure.” Michael led the tour onto the capes. Ocean spray blew them to a town of thatch-roofed, stone-walled cottages.

They ate breakfast in a cape-side cottage hosted by an elderly couple with long, braided hair. Native farmers and craftsmen came one-by-one to see the tourists. Jay noticed most were bald or had short hair. He used the phrasebook to ask if he could take their photos, and they all eagerly obliged. Some dragged their extended families back to the camera. Some brought wares for Jay to photograph: decorative metalwork, bouquets of crickets, hand-sewn plush birds, porcelain eggs and tea-sets, and more items like Jay had seen in the bazaar. One woman brought her goats to be photographed and offered hand-churned goat-cream for their tea.

As they ate, Michael pointed up at landmarks along the trail. “That fence surrounds our largest cricket-farm, where bug-sticks grow like grass. That there is the statue of a bird which paused waddling up the island to protect a lost human child. That inn is where we stop hiking tonight, and some miles higher is the white-walled monastery of Virgil Blue. Above that, you can barely see centipede-bushes. Then a permanent cloudy cap obscures the sacred peak.”

Jay thanked the cottage-hostess as she topped off his tea. It was hot sweet-tea, thick and opaque as butter. “Michael, I heard this island is the tallest mountain on Earth if you include the height beneath sea-level. Is that true?”

“Who told you that?”

“I read it in a red card-stock pamphlet.”

Michael chuckled. “Those monks probably consider the whole planet the underside of this island.”

The hostess’ husband brought the main course: enormous hard-boiled eggs. Jay hesitated to partake. “We can eat eggs?” Michael nodded as he sliced his egg and drank the yolk like soup. “May I photograph mine?”

“Sure, sure.” Michael wiped yolk from his lips. “These are unfertilized eggs gathered from the coast. There’s no sacred seed inside.”

Jay bit white egg-meats. Yellow yolk spilled out. He sucked yolk from the egg like mango-pulp, but his yolk seemed smaller than Michael’s. He contented himself with more egg-white until another, larger yolk burst in his mouth.

Jay drank the second yolk and photographed the double-chambered whites. He wondered if such an egg, being fertilized, would bear two fledglings or one. “Michael, how do you know the hosts of this cottage?”

“Cousins,” said Michael, “three or four times removed. We’ll find my relatives all over Sheridan. Most of us are from the same egg, so to speak.” He saw Jay prepare his notepad to ask about the idiom, but Michael knew they’d dallied too long over breakfast. He thanked the hosts and ushered his tour onto the trail before explaining. “Local legend says these islands were built by the biggest of the birds. She gave the first man, Nemo, an egg which hatched a hundred young. Our ancestors!”

“Oh,” said Leo, “that’s why you all look the same.” Michael scowled, as did Suzy, Craig, and Eva. Jay just sighed audibly and thinned his lips. He’d have phrased it differently, but he knew what Leo meant: the natives had all skin-colors and body-types, but many were bald, emphasizing round jaws and pointed skullcaps. “Like eggs, or something.”

The path wound around the island into the piney forest girdling its midsection. Occasionally Michael pointed at trees behind which birds hid waiting for the tour to pass before continuing their epic waddle after them.

As the tour circled up the island, they bridged the same river again and again. From each bridge, the river cut a clear view through the forest to the ocean. Jay took the chance to photograph the other islands from a higher vantage point each revolution.

As sunset neared and the forest darkened, the hamlets lit lanterns. Michael tapped his foot as Leo traded his sand-dollars for more crickets. “Be sure to smoke those before returning to the airport, Henry!”

Leo tssk’d and tried to light a bouquet of ten bug-sticks bound by masterful wing-work. “Not in front of Lilly!” Eva took her husband’s lighter. “When we stop for the night, you can smoke outside.” Leo grumbled at the sunset as they set off again.

A lantern-bearing group in robes met them walking the other way. Michael bowed his head to them, so Jay did as well. “Oran dora. Each night, these monks bring news from the white-walled monastery.”

“Oran dora,” replied the monks. “We bear the latest from Virgil Blue.”

“What does the Blue Virgil have to say this fine evening?”

“Nothing at all. Forty years of silence from our esteemed master. How wise to not waste a single word!” The monks carried the vital wordless message down the winding trail.

The tour continued up the island until the pines grew scarce. The few birds who survived to walk beyond the treeline did not hide from the tour, but instead marched with proud, arthritic plod. The birds nervously eyed woven nests left trail-side which held one porcelain egg for each bird succumbing to old-age at that elevation. Jay wondered if any bird had ever surpassed the island’s cloudy cap. Were they allowed to?

When the tour finally stopped at the inn, Michael pointed to the second island far below. “Look at the clearing where Virgil Green’s congregation sits and walks. When the students acclimatize to the sacred truth, they swim to this island and walk with the birds to the white-walled monastery above. I hope the sunset inspires within you the tranquility of understanding the Biggest Bird’s cosmic plan.”

Suzy and Craig cuddled on the nearby bridge and wrote in their Atlas by the dying sunlight. Eva pointed to distant birds and Lilly practiced naming their colors until it was too dark to distinguish them; then Lilly played with fireflies. Leo and Jay both took photos, Jay with his camera and Leo with his phone. Michael watched Leo’s phone over his shoulder. “Henry, I hope there are no birds in your photos.”

Jay showed Michael his camera. “I’d like to start hiking to the monastery before it gets any darker. You can keep my camera if you’d like, but I’ll take the flashlight-attachment to see my way.”

“Jadie Jackson, I know the owners of this inn. They’ll loan you a lantern. Keep your camera.”

While Leo stalked Eva and Lilly, Jay reconsidered his photos of a bird-statue. The stone bird stood on a stone box filled with lit candles, like a shrine. Its wings shaded the statue of a toddler like it was its own fledgling. Jay loved the exquisite masonry of its feathers, but worried it was so lifelike he shouldn’t have taken pictures.

“Eva. C’mon.” Leo grabbed his wife and daughter by the shoulders. “Let’s go to the monastery before it gets dark.”

“It’s already dark,” said Eva, “and Lilly has a blister from hiking. Maybe you can show us pictures in the morning?”

Michael gave Jay a lantern and a box of sugar-powdered pastries. Held at arm’s length, each pastry was barely bigger than the full moon. “The innkeepers suggest this offering will grant you audience.” Jay asked if his photos of the statue were acceptable. Michael just laughed. “Show the Virgils. They’ll love them.” 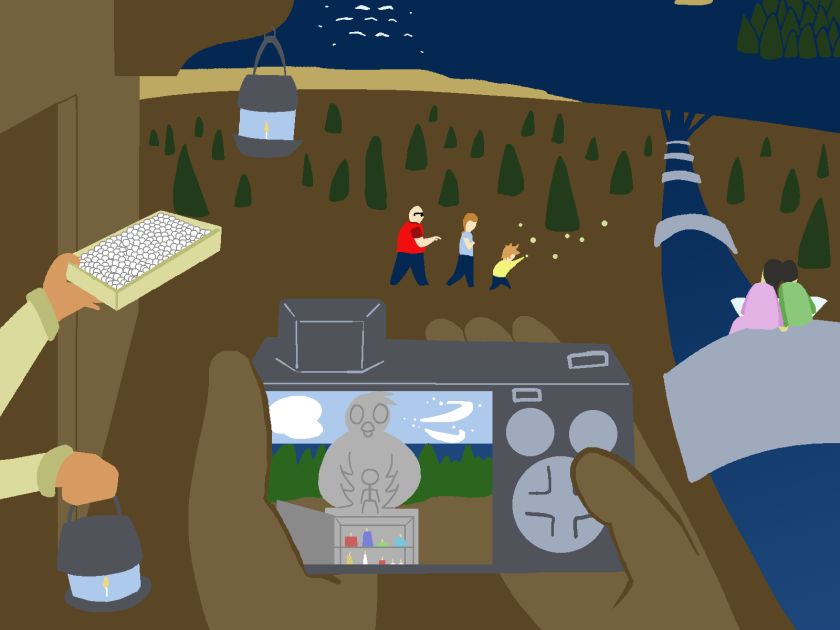