By the light of the lantern and the full moon, Jay hiked safely even as the trail hugged a steep drop on one side and a sheer cliff-face on the other. Uneven steps were carved into slick rocks lodged in the mountainside. Jay panted up a flight to find it was the last, and now he had to hoist himself over boulders unaided. He encountered the river a final time as it flowed from its source-spring. He removed his shoes and socks to ford the stream because there was no bridge.

He met no birds as he hiked. He still saw woven nests, but each nest held at most two porcelain eggs. Each egg wore painted lacework which Michael said marked former matriarchs of Virgil Green’s congregation. Jay took photos of each nest and bowed his head out of respect. When a stone ledge blocked his way, Jay hoisted the lantern and the box of pastries on top and climbed to them on his hands and knees. Finally he saw a wide, paved path to the monastery. Jay lie on cool flagstones and snuffed his lantern to conserve oil. Fireflies would light his way.

“Hey. Hey!” Jay sat up. Leo stood below the ledge and held up his backpack. Jay wondered how many scrapes he’d endured refusing to remove his sunglasses, as if the moon was too bright. Leo shook his backpack. “C’mon, take it.” 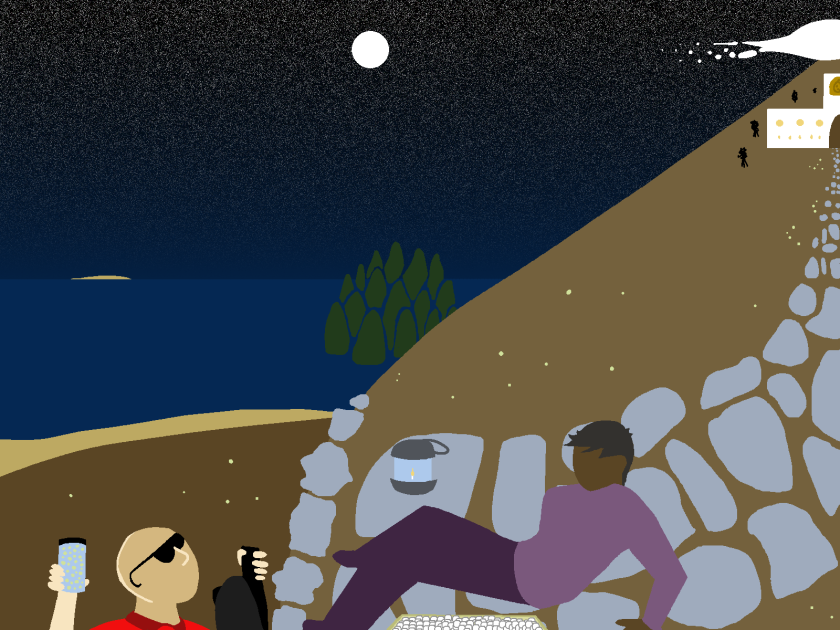 Jay hefted Leo’s backpack. “Did you have trouble hiking in the dark?”

Leo tossed a glowing jar. Jay, already holding Leo’s backpack, barely caught the jar before it hit the ground. “Hey, careful with that!” Leo kicked the ledge as he struggled climbing to Jay. “My stepdaughter caught ’em for me.”

The jar was filled with fireflies. They flapped madly against the glass, struggling for air and signaling for help with their taillights. Half had already died. “Need a hand,” asked Jay.

“I got it,” Leo wheezed. Sweat dripped down his face. “I got it. I got it.” He finally pulled himself onto the ledge. “See?”

Leo took his backpack, freeing Jay to retrieve his lantern. Leo smirked. “You needed a lantern, huh? I guess not all of us can be self-made men.” He smacked Jay on the back.

Jay pretended the smack made him stumble and he smashed Leo’s jar on rocks beside the path. The surviving fireflies escaped. “Whoops.”

“Ah, fuck! C’mon! Typical monkeying around.” Leo slung his backpack over his shoulders and started toward the monastery. “You can pay me back later.”

“I’ll have to apologize to Lilly.” Jay picked up his sugar-powdered pastries and walked the path. The monastery was close enough to count candles in its windows. “I hope we’re let into the monastery.”

Leo scanned the island all the way to the cloudy peak. “Did you seriously come all this way to meet some bums in a nursing home?”

“What are you here for,” Jay asked, knowing the answer.

“Check it out.” Leo pulled his backpack to one shoulder and unzipped it. He carried nothing but glass jars. Half were packed with bug-sticks. The rest were empty. “I brought extra jars just for this. Tell me you’re collecting centipedes, man! You gotta teach me! Don’t tell me you’re really here to fuck with monks!”

“I’m really here to fuck with monks,” said Jay. Leo scoffed. “You should join me, if you want centipede. Only Virgil Blue can properly prepare it.” Leo sniggered and smiled just to show teeth. “I’ve heard improperly prepared, the high is like being sliced by searing knives.”

“You said you weren’t religious.”

“I’m not just smoking, I’m selling! Skip the monks and get centipedes with me! The thick ones go for a thousand bucks a pop!”

The pair approached the monastery door. The white walls were tiled with thousands of sand-dollars. “Did you really drag your family here to source centipedes to hock back home?”

“Of course! My dad’s rich,” Leo said as if it explained anything. “Gotta show my step-kid the ropes of running a business.”

“Do what you want.” Jay photographed the monastery sans flash—the candlelight was perfect. “But if I were you, I’d visit Virgil Blue. Maybe the Virgils can teach you to grow crickets yourself so you can stop wasting time and money smuggling. You’d save on family-therapy as well.”

“Sure, sure. Do what you want. When I’m done here, I’ll relight my lantern. You’ll see it if you don’t go too far. Then I’ll lead you through the dark back to the inn.”

“I didn’t ask for your company, but here we are. We’re both doing favors tonight.”

Leo swore and walked off the path. He stumbled on a rock and at last deigned to remove his sunglasses. He hooked them on the neck of his Hawaiian shirt. Still he struggled in the night. “You broke my jar! How can I find centipede-bushes like this?”

“Open another jar and catch fireflies as you go.”

Leo opened a jar and swiped it over fireflies. When he caught none, he swore loud enough for Jay to hear language too colorful to print in square brackets or otherwise.

“Call me what you want,” muttered Jay. Leo continued to do so until his voice faded in the distance. Finally alone, Jay knocked on the monastery door. While he waited, Jay realized he’d been right to introduce himself as Jadie. The fake name kept ephemeral armor around him, as if he wore saran wrap. Leo didn’t even believe Jay was his real name.

Jay knocked again and capped his camera. He wondered if he would have the chance to photograph the monastery in daylight. Up close, the candles made the walls of sand-dollars look like scrutinizing eyes. Jay knocked a third time, vowing if no answer came, he would leave the monks alone.

Footsteps approached and the door popped ajar. A young woman peeked through the crack. “Oran dora. [Can I help you?]”

“[We have enough sand-dollars.]” The woman’s skepticism melted when Jay showed the box of pastries. “[Thank you! Please?]”

“[Please.]” Jay allowed her a pastry. She kept the doorway narrow. “[Also I have a cricket for Virgil Jango Skyy.]”

The woman struggled for English words. “Who gave you cricket?”

“Faith Featherway? [You have good connections.]” The woman opened the door. “[Come in. We’ve been expecting you.]” 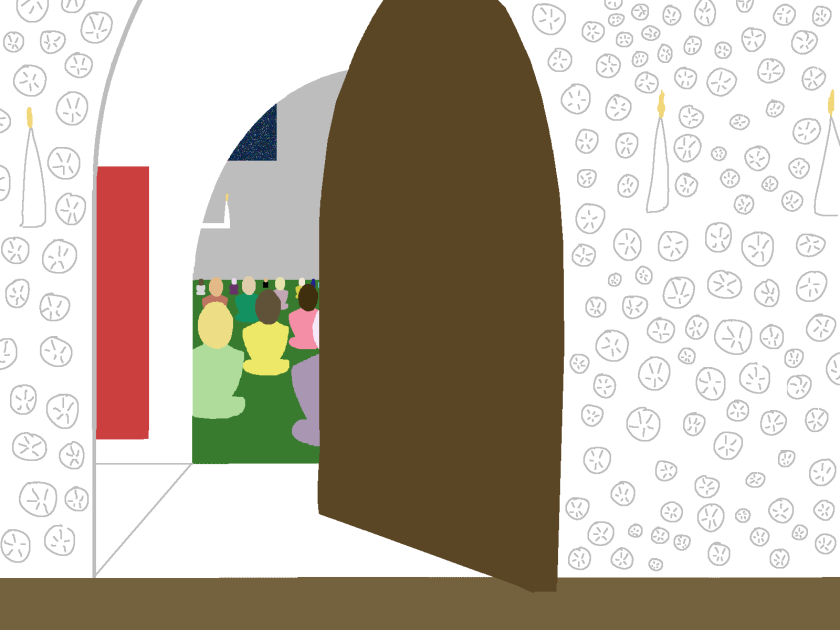