In Y1. The Staring Contest at the End of Time DanJay finally confronts Anihilato again. Last time Dan met the King of Dust, Dan’s soul was stuck in an egg until Jillian’s soul happened to free it, creating Jay. Now DanJay knows exactly what’s at stake in his staring contest. If Jay blinks, not only will his soul be devoured, but Anihilato will escape from the Biggest Bird, Akayama. As a result, Lucille’s Wheel of Reincarnation won’t be able to reconstruct Earth’s life. Even if the Galaxy Zephyr managed to defeat the Enemy Hurricane, it would be a Pyrrhic victory. Worse yet, DanJay can’t possibly win the staring contest: Anihilato has six eyes and closes them in pairs to keep constant vigilance. Even when Anihilato blinks, it faces no consequences.

Overcoming hopeless situations by understanding them is a narrative element executed beautifully in a manga/anime called Kaiji: The Ultimate Survivor. You can watch it for free on Crunchyroll, but be warned: it’s not for the squeamish.

Itou Kaiji is a gambling addict conned into betting his life. To survive and crawl out of debt, Kaiji must defeat opponents in card games, dice games, and even mahjong. But he doesn’t always win, and when he loses, it’s painful. Literally painful, as he sometimes wagers body-parts. (Remember to read manga right-to-left.)

I can’t recommend this anime enough. I’ve never before had a panic attack over a fictional character trying to win the jackpot at a pachinko machine. There are TV shows about superheroes, ninjas, and superhero-ninjas which can’t match the nail-biting intensity of Kaiji playing rock-paper-scissors.

The intensity of Kaiji’s gambling is something I’d like to reflect in Akayama DanJay. While Lucille has a traditionally climactic fight in a giant robot, Dan and Jay have staring contests for the fate of mankind. So what makes Kaiji intense? Spoilers incoming.

First, Kaiji can lose. If you’ve watched a lot of anime, you might roll your eyes whenever a powerful enemy appears because you know the hero is just going to power up and beat them next episode. But by the end of the first season, Kaiji loses all his money, all his friends, an ear, and four fingers. Holy shit. 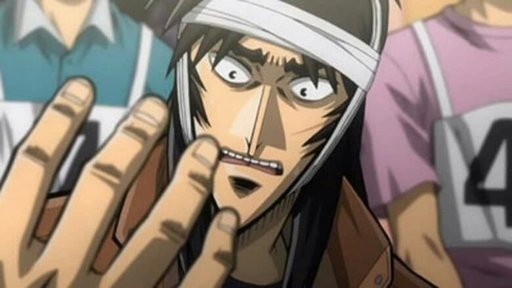 Likewise, Dan loses his staring contest with Anihilato. I hadn’t seen any Kaiji when I wrote that first chapter, but I think I did well enough: Dan eked out a small victory against a bird before his teeth-splitting defeat to Anihilato. Jay isn’t going to lose—it’s the end of the book, after all—but Dan’s failure shows the reader DanJay isn’t an invulnerable protagonist, making tension possible.

Second, Kaiji’s gambles usually have simple rules. Kaiji’s first gambles are literally rock-paper-scissors. Mahjong isn’t so simple, but the version Kaiji plays is theoretically simple if you actually know how to play mahjong to begin with. Explicit and unbending rules let Kaiji pull off jaw-dropping wins which always feel deserved.

DanJay challenges Anihilato to staring contests. Everyone knows how those work; blink and you lose. It’s pretty one-sided, because Anihilato can blink with impunity; only DanJay would turn into teeth.

Third, Kaiji’s gambles have life-altering stakes. Maybe he’ll pay off his debt, or maybe he’ll be subjected to a lifetime of slavery. Maybe he’ll make millions of yen, or maybe he’ll lose his fingers. The incredible and escalating stakes make every episode nail-biting, even when Kaiji just rolls some dice. Often, it’s not just his own fate on the line; other gamblers stake their lives on Kaiji’s. This serves double-duty by raising the stakes while making Kaiji a ‘good guy’ the audience can root for. 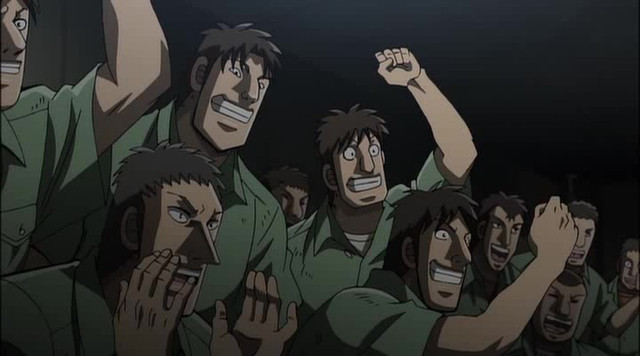 Dan is already dead when he challenges Anihilato. What’s at stake is his soul, which I’d argue is a step above gambling his life. Dan gambles his soul for the sake of Faith, then for the sake of Beatrice. Even though Beatrice doesn’t need to be saved, these bets let Dan ‘save the cat,’ a screenwriting concept stating that a story’s protagonist should demonstrate very early they’re worth rooting for by performing a kind, selfless act. Dan trying to save Beatrice is arguably a selfish act, because he’s trying to curry her favor, but Dan ups his bet to saving all the souls in Anihilato’s box. Dan loses, so his soul is chewed up and he’s shoved into an egg.

When Dan returns as Jay, Jay understands the REAL stakes. If he loses, it’s not just that his soul will be eaten for good; all sentient life in the universe rests in the balance. However, Jay declares he’s not fighting for anything:

“I am the inevitable,” said Jay, “and so are you. What happens happens. I’m subject to reality, just as you are.”

“This doesn’t mean anything,” said Anihilato. “You’ve failed. You and that frigid rat!”

“You’re half right,” said Jay. “This doesn’t mean anything.”

The progression of stakes—from Beatrice, to all souls, to all sentient life, to nothing at all—shows DanJay’s progression from self-centered to selfless. The only reason Jay is worthy of winning a gamble for the sake of the universe is because he doesn’t make it about himself.

Fourth, Kaiji’s gambles take twists and turns. Some people think Kaiji playing the pachinko machine drags on too long, and I agree, but I still love it because from moment-to-moment Kaiji can seem to have no way to win, or no way to lose. The back-and-forth, with upset after upset, renews the anxiety every episode. Kaiji usually begins at a disadvantage he must overcome; in the first season, he’s immediately tricked and loses most of the resources he has to gamble with.

Dan barely beats a bird, then is quickly bested by Anihilato. When Dan closes one eye, then opens it and closes the other, it barely buys him seconds. The delay makes his inevitable loss more painful, I think.

Jay begins at a disadvantage when Anihilato throws sand in his face. Then tears, sunlight, shadows, and sweat shift the tide of battle. My goal is to make the reader clutch their hair and scream, “all sentient life in the universe is doomed because Jay gets sweat in his eyes? Aaaugh!”

Fifth, Kaiji and his opponents cheat. Kaiji’s victory often depends on understanding how the opponent is cheating and using that knowledge to parry. When he learns an opponent is monitoring his biorhythms from his ear, he cuts off his ear for a slim advantage.

Dan doesn’t cheat, unless you count closing one eye at a time. Anihilato cheats against Jay by throwing sand. Jay sort of cheats: he knows Akayama will arrive eventually, and he let the staring contest commence just to keep Anihilato in place until then. Jay will win by exploiting his knowledge of the secrets behind reality.

Sixth, and most importantly, Kaiji’s gambles are often thematically relevant. The most obvious example is a card game with three kinds of cards: emperors, citizens, and slaves. Emperors beat citizens, citizens beat slaves, but slaves beat emperors because slaves have nothing to lose. In this game Kaiji manages a few decisive victories against an evil company by cutting off his own ear. Just like the slave against the emperor, Kaiji wins because he has nothing to lose. Kaiji’s first gambles, over rock-paper-scissors, echo the theme song’s insistence that “the future is in our hands.” Kaiji plays mahjong, a four-player game, against only one opponent; the empty spaces at the table remind us of his two friends helping him cheat.

I hope a staring contest seems thematically relevant for Akayama DanJay. Eyes are important: Akayama grows compound eyes to demonstrate her godly perspective; the Hurricane Planets communicate with their eyes; Leo always wears suspicious sunglasses. In my art characters rarely have eyes at all, except to represent penetrating understanding.

So when Dan and Jay stare at Anihilato, it’s not just a staring contest. Thematically speaking, satan-allegory Anihilato is administering judgmental glares. Dan withers under that glare. Jay knows the gaze is powerless compared to that of Akayama, who has compound eyes Anihilato could never hope to cope with. Jay’s gaze is not divine judgement, but divine acceptance. He knows Anihilato is necessary to Akayama in the same way it’s necessary to remember horrifying historical events. To stop staring at Anihilato would be like trying to ignore Leo. We’d like to ignore people like Leo, but we mustn’t. We must stare them down and not let them escape.

Jay begins his contest with an explosive entrance. I want Jay emerging from the egg to reflect Christ’s harrowing of Hell, in which Jesus crushes a demon under a door on his way to salvage the damned. Jay’s death last section was a thinly-veiled crucifixion. I try to dilute the Jesus-imagery with Faith’s protective tail, which echoes the Buddha’s shelter under a cobra as it rained during his meditation.

The concept of a staring contest against all humanity’s foulness also reflects this line from The Once and Future King, a book about King Arthur’s childhood and rule:

I should pray to God to let me encounter all the evil in the world in my own person, so that if I conquered there would be none left, and, if I were defeated, I would be the one to suffer for it.

Dan, the mortal everyman with self-destructive compulsions, takes on Anihilato and fails, but it’s this failure which turns him into Jay, who can defeat Anihilato for good. Attacking all of humanity’s ills at once might seem to be a reckless, impossible task, but the first step is trying. Just as Merlin propels Arthur to greatness by preparing him for the horrors of the future (Merlin, who lives backwards, warns Arthur of World War II and Adolf Hitler), all the Blue Virgils residing in Anihilato keep the monster intact for Jay to properly challenge.

I hope all these elements combine to make a thrilling emotional climax for DanJay. What Dan could never do, he’s learned to accomplish as Jay.

Next Section
Table of Contents