Eggshell isolated it, an ivory wall. Egg-whites pulsed with its subtle heartbeat. The sunny yolk warmed its joints.

All of a sudden, it was gripped by desire for birth. It spread wings to breach its shell and release the egg-whites. It felt dirt in its claws. Behind, Anihilato snacked on eggshell and licked yolk from each fingertip. “Your challenge, Dan Jones.”

It was fist-sized with blue feather-fluff. Its beak bore a scythe’s curve, but its one eye held an innocent youth. Its left side was a mess of boils and teeth, with crowns and roots jutting at odd angles. “Is it a bird?” asked Dan. “It’s a hobby,” said Anihilato. “My spawn are not long-lived, useful only for consumption.”

“Virgil Blue must have taught you of the Teeth that Shriek,” said Anihilato, “if you did study with him, of course. Surely you know the danger of locking eyes with the afflicted?”

As the words left Anihilato’s lipless mouth, Dan found his gaze fixed on the bird’s beady black eye. His pupils tightened in concentration.

Anihilato slithered to whisper in Dan’s ear: “I am invulnerable to the teeth. My spawn are not.” It put three hands on both Dan’s shoulders. “Blink, Jones, and you’ll succumb to the Teeth that Shriek. To end your unimaginable suffering, I will claim you. You’ll sit in an egg until your ego melts and then I’ll eat your soul.”

The bird turned so its eye faced him head-on, but thoughts of the teeth still tickled Dan’s brain. He imagined a molar embedded in his throat. He felt a canine burrowing behind his cheekbone.

“Peep,” said the bird. It looked down and pecked the dirt. Dan released the breath he’d held.

“Well done, Danny.” The King of Dust slapped his back. “Perhaps you really have met Virgil Blue once or twice.”

“Where’s Faith?” Dan crossed his legs and covered his eyes. “I won’t look until I hear her voice.”

“Oh, hush, Jones. I’ll return her soul, but her Eternity-Card remains in my box.” He chose Faith’s egg from the wall. “If she returns, I’ll not hesitate to reclaim her. At the end of time she’s mine.”

Anihilato faced the bird and closed five eyes to match its gaze. “Begone!”

The bird blinked. Its flesh bubbled and darkened until it was a black centipede with wriggling orange legs. Anihilato slurped it down alive.

The egg cracked. Faith gasped from the crack in a cloud of fog. “Holy shit!”

“Faith! Are you okay?” Dan hugged her, but she evaded his arms like steam. “I’m so sorry I couldn’t—”

“Let’s go!” She deposited into shambling snow. She made a crude leg and shook it at the exit. “Dainty, run!”

“Faith—” Dan hesitated to touch her. Instead he shook his head. “Leave without me. I’ll be up soon.”

“What?” Faith produced another snow-leg and hobbled away. “Don’t tell me you wanna stay down here!”

“I just bet my Eternity-Card for your soul.” Dan pointed at Anihilato’s box. “That means I’m not done. I can’t leave if Beatrice might be trapped here. Anihilato, let’s make another wager.”

“Are you kidding?” Faith’s eyeballs emerged from the snow to glare at Dan. She carved herself a sharp snout. “Dainty, I was just annihilated, and as far as I know, that’s not generally reversible. That’s all our luck used up already!” When Dan didn’t turn, she jumped and shouted. “You’re a Zephyr! You’re supposed to go to the Mountain!”

“The Mountain is in me.” Dan sat before Anihilato. “I’ll surface when I’ve salvaged Beatrice. And Jay. At least.”

“Dan! I miss them too, but there’s an order to things here!” She growled. “Did you spend seven years in a monastery just to gamble your soul for old pals?”

“No, but now that I know it’s an option, I can’t think of a better reason. I should have devoted my whole life to this.”

Faith tssk’d. “You’re a bad liar, Dainty. This was your plan all along. You’re right where you meant to be.” She turned tail to him. “I’m flying to the Mountain to tell the Zephyrs why I’m late.”

As she left, Anihilato squinted at Dan with three left eyes. “Why should I accept another wager, monk? The first time was a courtesy to Virgil Blue. I don’t have all eternity to waste gambling.”

“Then we’ll make it quick,” said Dan. “I wager my Eternity-Card against your entire box and every soul-receipt inside it.”

“If you dare to challenge me, cease speech and match my gaze!” Anihilato stormed up to Dan in a flurry of limbs. “Lock eyes with the Master of Nihilism and feel your consciousness shred!”

Dan was fixed on Anihilato’s six shining eyes. He couldn’t even breathe.

A tooth broke the skin on Dan’s neck. He shuddered as blood trickled down his chest. 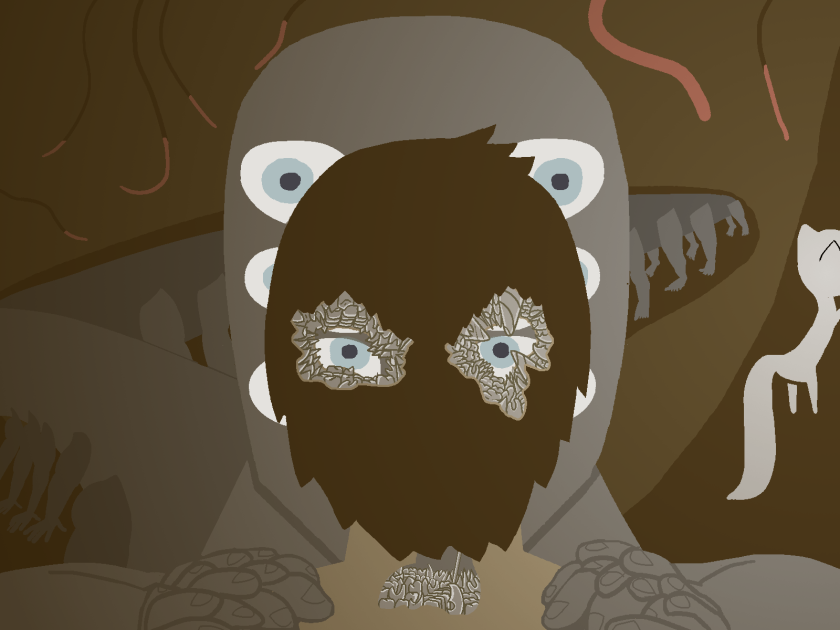