I don’t think it’s working quite yet, but maybe next time?

This time I’m all about entities which are produced, exist, and are destroyed, like video-game characters and virtual-computers and stage-magicians.

I learned about Luigi at an internship in Data-Engineering, but I mostly worked with Django. There are lots of cool data-processing doodads, and they’ve got pretty cool names.

There are 15 illustrations in Homer VS the Elf. I won’t pretend they’re any good, but they’re probably the best so far, and I had fun making them. Today I’d like to describe my illustrative process and illustration’s relation to authorial intent, which is the latest buzzword I see online nowadays and might get me some views if I put it in the tags.

I started making little illustrations with Akayama DanJay because the psychedelic anime-robot-fight felt deserving of art to draw people’s attention. I didn’t worry much about making the illustrations actually match up with the text. Sometimes I’d elide scenes so the illustration transitioned from one to the next. The style is minimal with flat colors, and each character is color-coded. I started with only one illustration at the end of each section, then returned later to add another to each section’s beginning. Some sections have more than ten pictures.

A chapter of The Minotaur’s Board-Game might have thirty illustrations. The first step is always rereading the chapter and writing “pict1,” “pict2,” and so on whenever the readers meet a new character or visit a new location, or if the text could be clarified with pictures.

Once I’ve figured out how many pictures I want, I open up the GIMP (GNU Image Manipulation Program). There are other image editors, like Photoshop, but the GIMP is free and I can write plug-ins in Python to, for example, automatically generate any number of empty images with a white background layer and a transparent layer for sketching.

(I made a palette so it’s easy to keep colors consistent from chapter to chapter. I won’t pretend to know any color-theory, but I think my palette looks nice. I made it here.)

I sketch all the illustrations in one go; it can take a whole day. I’ve got a Wacom tablet and pen, so I can use natural hand-movements to draw on my computer. The harder I press the pen, the more opaque the line! 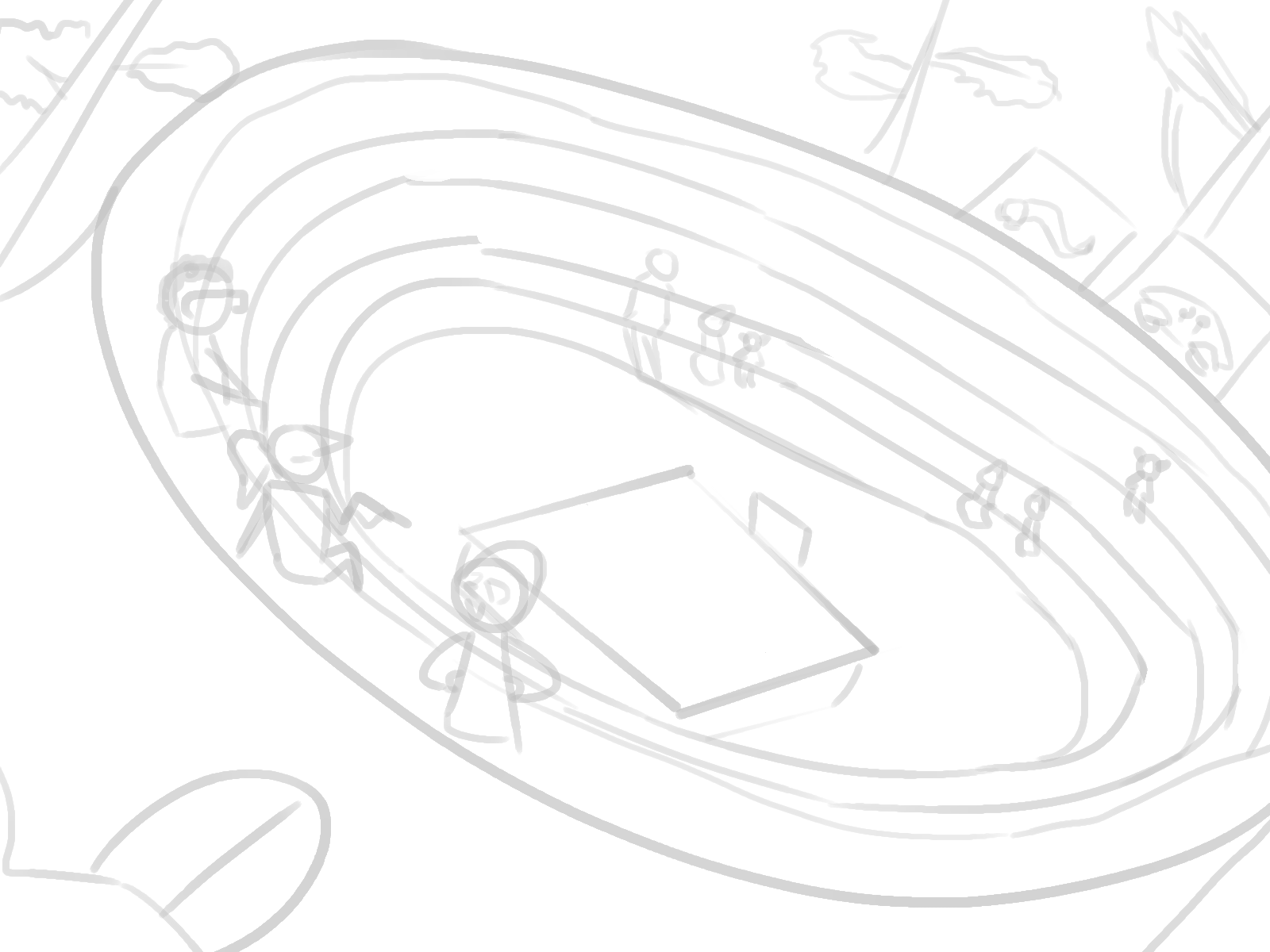 Then I decrease the opacity of the sketch layers and color all the backgrounds; that can take a whole day, too. I color unimportant background characters like Akayama-DanJay-style mannequins so they don’t distract from the real characters.

Then I draw all the main characters in a new layer over the background. It’s often convenient to put each character on their own layer so they can be moved independently, especially if they overlap. Finally I disable the sketch layer.

Pictures are especially helpful for table-war. Whenever a table-war strategy is hard to describe, I know a picture can save my butt.

But sometimes the text and the pictures disagree. I describe huge audiences but draw less than ten spectators. I’ve probably put Homer’s eye-patch on the wrong side more than once, and in the pictures he has hooves instead of fingers. Sometimes when eliding two scenes into one illustration, asynchronous events appear simultaneous. In these cases I’d argue the text takes precedence, if only because text is easier for me to edit and update than illustrations.

But as an author, can I declare how my work should be interpreted?

This has recently come into question with the latest works from J. K. Rowling and, more classically, George Lucas’ Star Wars. Is it appropriate to retroactively declare a character’s race, gender, or sexuality? Must we accept midichlorians as canonical? Who ultimately decides a work’s meaning, its author or its audience?

One of my goals in writing these commentaries is to show that authors only pretend to know what’s going on in their stories. Writing is literally just making things up. An author might plan some plot ahead of time, but that plan is just made up, too. Iterative making-stuff-up is the name of the game.

So maybe an author is the grand maker-upper whose holy word is the only authentic source of interpretation, even if their book disagrees with them. Or maybe an author’s word is worthless, because stories are ephemeral visions appearing differently to everyone and the text is the only thing we can all agree on.

When we talk about our favorite fantasies to fellow fans, we like to imagine our visions of the fiction match, or at least overlap. Hence, I’ve added some pictures. My illustrations don’t perfectly encapsulate the text, but I hope they provide a cohesive universe and showcase characters’ emotions or whatever.

Anyway, thanks for reading. If you’ve enjoyed my rambling, or you like minotaurs and board-games, feel free to follow me and catch the next update.