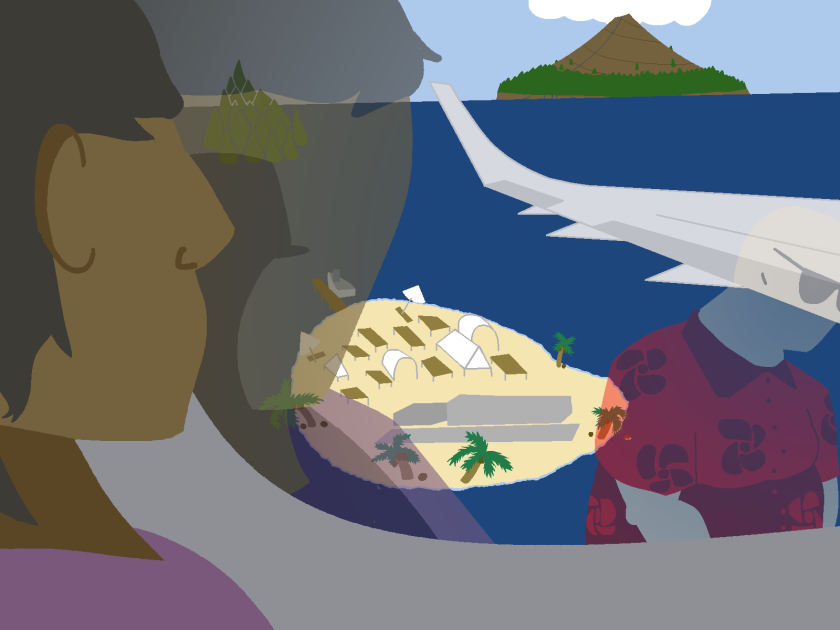 The third island of Sheridan was barely big enough to hold an airstrip. Only a handful of people stepped off the plane, and half of them just wandered gift-shops as the plane refueled. Only five others joined Jay waiting to pass through customs.

In the same corridor was a security-checkpoint for departures. Security-personnel led dogs on taut leashes around luggage leaving the islands. Jay knew the dogs were sniffing for crickets and centipedes because a sign said so in ten languages. For the illiterate, a cricket-and-centipede icon was crossed out in a red circle.

In comparison, customs would be a breeze. Jay bookmarked the photo in his passport with his completed declaration-card. The man from the plane in dark sunglasses and red Hawaiian shirt allowed his wife to organize his family’s passports as he sat on Jay’s right.

On Jay’s left a middle-aged Chinese couple had prepared their documentation and now huddled over a well-worn Atlas. They spoke in a dialect Jay didn’t recognize. He decided to introduce himself in Mandarin. “[Hello. My name is Jay. I come from the United States.]”

The couple was struck mute, then laughed at each other. “[I am Zhang.]” The man shook Jay’s hand. “[This is my wife Li Ying. We come from Southern China.]”

Jay appreciated Zhang dumbing down his dialect. “[I admire your map. You have many pen-marks in places I have none.]”

“[This is nothing,]” said Li Ying. “[Look at this.]” She unfolded the Atlas’ largest map of China. Jay fawned over decades of notes written along routes and rivers. There was scarcely an acre the couple hadn’t visited. “[We’ve been to every country and Antarctica. Now we’re visiting every island.]”

Jay’s response was interrupted by the man in sunglasses. “What’re you talking about?”

Zhang showed him the Atlas. “We have—uh, a map,” he said, reaching for English words. “It shows where we go for many years.”

The man blankly evaluated the Chinese script. Jay knew Chinese and could barely read the handwriting, so he doubted the man understood a single character. He pointed his hairy forearm at the Atlas. “What’s that?”

Jay sucked air through his teeth. If the man recognized any character, it’d be the swastika. “It’s, uh…” Li Ying read nearby notes. “A temple called Jokhang.”

“No, the spinny thing.” The man tapped the swastika. Jay thought the man’s sunglasses and poker-face did little to hide the disingenuousness of his ignorance. “What is it?”

Zhang sensed a cultural divide and muttered in his wife’s ear. “This shape,” he said to the man, “is used for temples on maps. It means…” He looked at his wife.

“Auspiciousness?” she guessed, struggling with the central syllables.

“To cross your arms?” tried Zhang, folding his arms over his chest. “There are many meanings. It’s popular in many areas.”

The more swastikas the man found on the map, the wider his grin became. He turned to his wife. “You hear that, Eva? It’s popular in many areas.” She continued reading her daughter a picture-book. “Hey, Eva, you hear that? They said it’s popular—”

Jay excused himself from the conversation as soon as a customs-official appeared. Jay relinquished his passport. “Thanks.”

The customs-official compared Jay’s passport-photo to the real deal. Since last renewing his passport Jay had gained twenty muscular pounds, and he had forty hours of five o’ clock shadow. The customs official didn’t seem to mind. While waiting, Jay noticed the airport’s workers had all varieties of skin-colors. Many were bald.

“Oran dora. Welcome to Sheridan.” The customs-official stamped Jay’s passport and returned it. “Enjoy your stay.”

As Jay walked to the lobby, he watched departing tourists comply with stringent security. They removed their shoes and sent their bags through X-ray machines. When a dog took interest in their luggage, security searched it for crickets and centipedes.

One dog was distracted by Jay. Its leader tugged its leash, but the dog wouldn’t look away. The leader called another security-guard and pointed at Jay. Jay meekly smiled at them. The two security-guards brought the dog near. “Would you remove your backpack?”

Jay did. The dog sniffed the zippers and put a paw on the outer pocket. “Would you open it, sir?”

Jay did. Before the security-guards could inspect the contents, the dog bit the corner of a white envelope and dragged it out. “Woof,” it said proudly.

One guard took the envelope. “What’s in here?”

“I’ll open it for you,” said Jay. The guard returned the envelope and Jay tore it open. Inside was a holiday-card featuring a snow-white fox traipsing through a winter wood, and a bug-stick. It was an exquisite specimen hand-grown by Faith with wings hand-wrapped by Dan. Jay was sorry to give it up. “I apologize. I had no idea.”

The security guards hee-hawed and slapped their knees. “Keep it,” said one. “You’re the first person to ever smuggle a cricket into Sheridan. It confused our dog.”

The other guard scratched the dog behind the ears. “Good girl,” he said. “You caught him.” 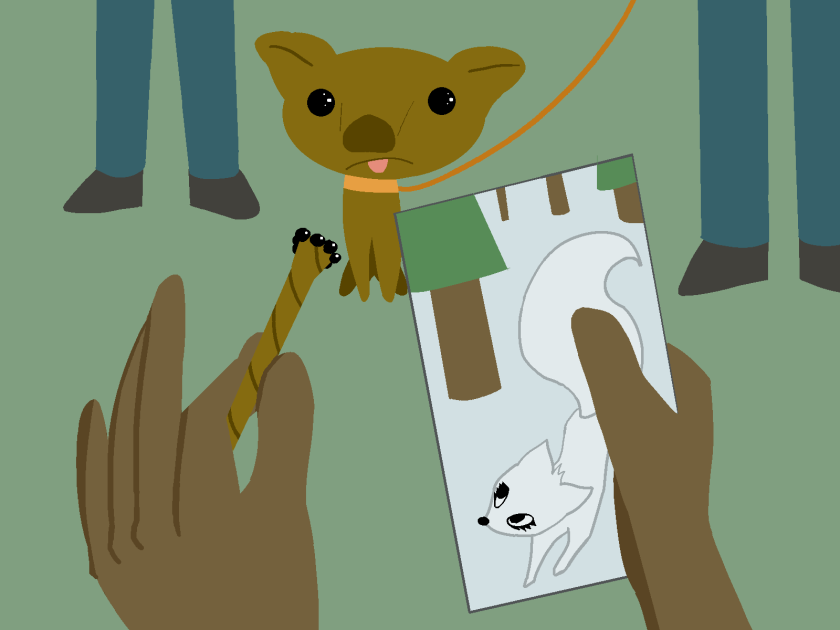 Jay stashed the bug-stick in the envelope. “Do you get lots of smugglers?”

While one guard led the dog away, the other considered the question. “Crickets are only legal in Sheridan and Amsterdam, but they grow in most conditions. There’s no need to smuggle—people grow their own. But some people forget bug-sticks in their luggage, so we confiscate them to avoid international incident. Centipedes are illegal everywhere, and they only grow near the peak of the main island of Sheridan. Anyone with a centipede in their luggage is a smuggler, and a devoted one. We catch at least one a month, but we worry some slip through.”

The lobby contained a kiosk with a map of Sheridan’s three islands. The man in the kiosk was about thirty years old and rail-thin, but his face was littered with laugh-lines. His skin was copper-colored and his oily black hair was shoulder-length. His eager grin invited Jay’s approach. “Hi. I reserved a spot on the bird-watching tour taking off today, under Diaz-Jackson?”

“Jadie Jackson! Oran dora! The Biggest Bird shakes hands with you!” The man leaned over the desk to hold Jay’s hands as if consoling him on the loss of a loved one. “My name is Michael. I’ll be your guide.”

“Take this.” Michael gave him a phrasebook. “Most islanders outside the airport speak little English. Impress them by speaking Sheridanian.” From customs, the Chinese couple and the family of three joined Jay at the kiosk. Michael grinned and greeted each of them with a phrasebook. “Bird-watching tour? Bird-watching tour? Ah, you’re all here!” Michael vaulted the desk and led the six tourists to the exit. “Let’s lunch in my family’s restaurant. Then we ferry to the second island of Sheridan!”