Three islands are the sole inhabitants of the area known as Nemo. Stranded between New Zealand, Chile, and Antarctica, the Islands of Sheridan are at least a thousand miles from foreign shore in every direction. 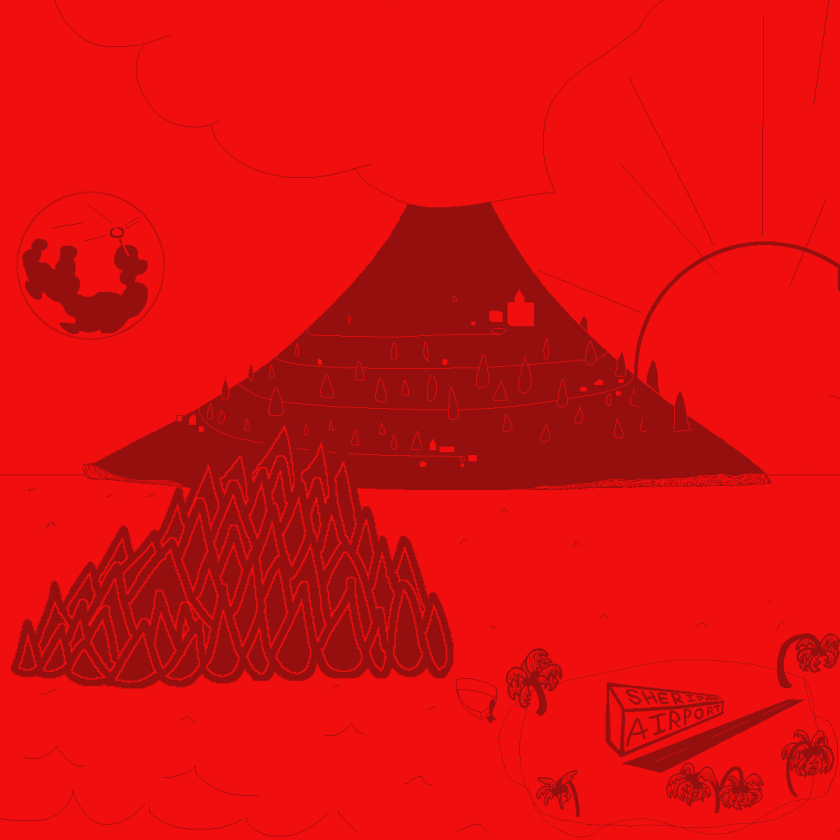 The Biggest Bird made the Islands of Sheridan as her paradise on Earth. She taught the first man, Nemo, what to eat, and what not to eat, and bore him sons and daughters from an egg. She declared Nemo the first Virgil Blue, leader of the Sheridanian congregation, and ever since, the title has passed from generation to generation. Lesser Virgils guide students’ understanding of the Blue Virgil’s sacred truth.

After leaving her islands, the Biggest Bird erected the rest of the Earth. Thusly, the Bird’s influence is seen in philosophies the world over. Virgil Blue’s monastery on the main island houses a library of texts from every earthly area and every time-period, annotated to outline featherprints from the Biggest Bird’s act of creation. Her wisdom is found in fiction and nonfiction. In physics and magic. In sand and sky. There are no coincidences.

Jay squinted at the text.

Today the Biggest Bird resides on her Mountain in the next eternity. It is therefore speculated that elevation marked her seal of approval when she made the Earth. Foothills grew beneath her flight-path and mountains sprouted where she deigned to land. This brands Sheridan as the holiest area on Earth: the main island extends from the seafloor to a permanent cap of clouds. Including its height beneath the ocean, it is the tallest mountain on Earth.

The Islands of Sheridan bear a population of sparse thousands, mostly ancestors of the egg-born. More than half devote years of their lives to monasticism. Virgil Blue’s monastery is home to hundreds of students and a circle of lesser Virgils. Satellite-groups exhibit unique and varied practices like masked dancing festivals, deity-visualization exercises, and religious agriculture. Only three commandments assert themselves across all islanders:

Never consume centipede except when prepared by Virgil Blue.

Never climb above the permanent cloud-cover. Sheridan’s peak is always obscured. It must remain so.

Jay Diaz-Jackson, remember these rules when you journey to Sheridan. We expect you shortly.

Jay closed the pamphlet and examined the fist-sized fledglings on its front. They looked somehow familiar. He covered half a fledgling’s face with his thumb. More familiar by the moment. “Dan, have you seen birds like this before?”

He’d forgotten Dan had gone. He was still in the bathroom, quietly sobbing for some reason.

Jay turned to the next page. On the left side, hand-drawn crickets budded from soil just like in Faith’s cardboard-box. On the right side, the largest of three islands was crowned with clouds. He read:

Tourists to the islands generally belong to one of two categories: those interested in bird-watching (but not bird-photography, we emphasize) and those whose international flights require refueling on our runway and who decide to stretch their legs in our airport. Both categories are impressed by the bounty of the Biggest Bird, including fresh air, breathtaking vistas, and tasteful gift-shops. We encourage you to visit our islands and discover your connection to the Mountain in the next eternity.

That means you, Jay. You must find the Mountain within you.

“Faith?” Jay shook her shoulder. “Faith, can you read this?”

Faith released the couch-cushion and stared blankly at the pamphlet. “Read what, JayJay?”

He pointed to a line accosting him by name. “This right here?”

“Of course I can’t.” Faith cuddled the cushion again and rolled into the couch’s corner. “I can’t read Chinese.”

“No, not the Chinese, the—” Jay tried rereading the offending statement. Symbols flickered between languages. “Oh my God. I’ve got to go to Sheridan.”

“What?” Faith rose from her stupor to pin Jay against the opposite armrest. She wrestled the pamphlet from him. “JayJay, you can’t go to Sheridan!”

Faith tried to unwrap his logic as she twisted to restrict Jay’s movement. “But JayJay, it’s so far away!”

“I can’t!” Faith released Jay from her grapple. “BeatBax would never let me go to the Cricket-Centipede Islands! Just stay in LA and smoke with us!”

“No! I’ve got to find the Mountain within me!” Jay now struggled to find his name in the text. “Listen to your box of crickets, they’re singing it!”

The sound of their conversation drew Dan from the bathroom. His gaunt stride silenced them. They made room on the couch for Dan to faint between them, red-faced and wet-cheeked. His mouth opened as if to speak but he produced no words. Finally he shook his head and asked, “Can you read?”

“Gorgeous,” she cooed to the fledglings on the pamphlet’s front. “Look at these beautiful birds!”

“Just about back to normal,” said Dan. “Both of you should eat. That’ll help you come down.” He slowly stood and carried the cupcake from the coffee-table to the kitchenette to cut. “Happy birthday, Jay.”

“Dainty! Cut it into fourths,” said Faith. “Then you and BeatBax can share with us, and we’ll all sing!”

“I… I’m sorry.” Dan cut the cupcake into thirds. “I need to tell you something.”