Dan sipped the last dregs from each pint. He’d started slurring, so Jay elected not to buy him another. “I think I’ve met Leo.”

“Of course you have,” said Dan. “He was in our homeroom in high-school.”

“I meant more recently, but continue.”

Dan buried his face in his gloved hands. “Leo never got to beat the smug out of me. I attended college where my dad killed himself, since the University was financially supportive and let me live in his old apartment. I didn’t see you or Beatrice or Leo for years, but Faith took art-classes on campus, and we always ate lunch together. One day she invited me to a party.”

Faith lived with Beatrice on the top floor of a beach-side apartment. The first floor belonged to a frat-house whose brothers streamed up exterior steps in a vertical zigzag of bed-sheet togas. Dan made no conversation as he climbed. He instead watched the stars. 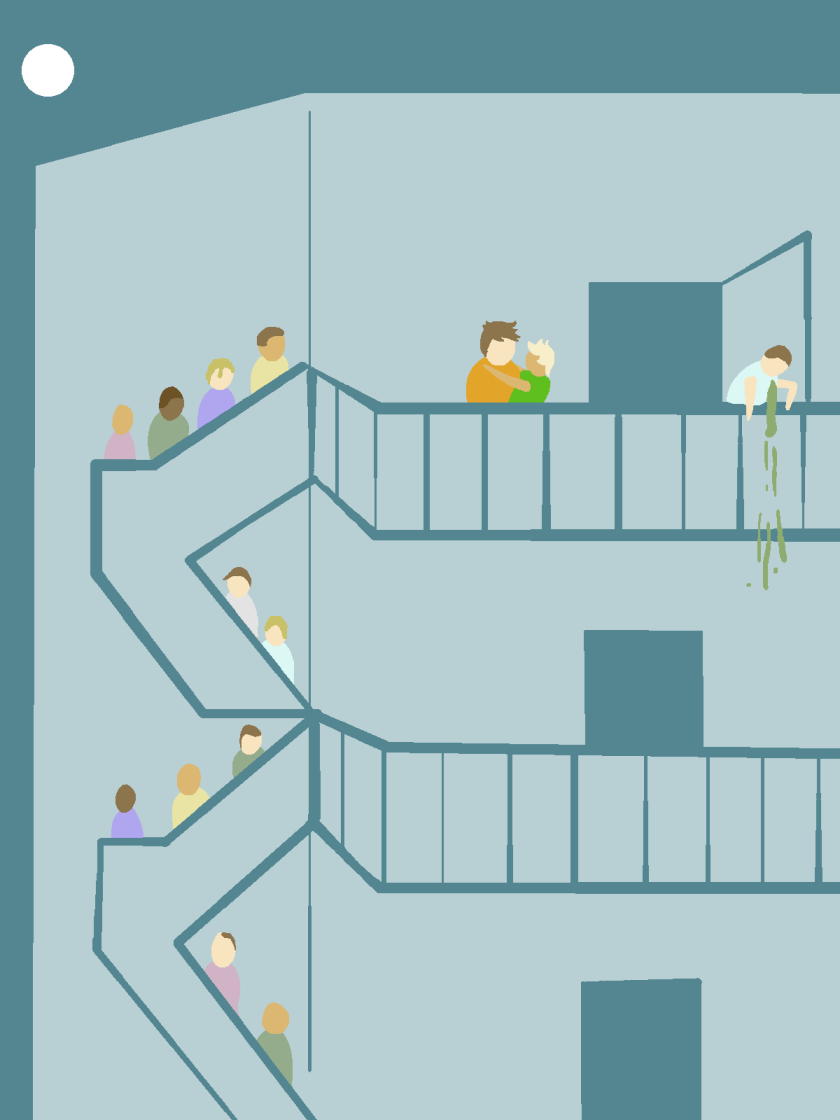 At the top landing, toga-brothers filled the balcony overlooking the ocean. Faith leapt from the crowd and hung from Dan’s neck. Her cheeks were flushed. “Dainty! You made it!” She kissed him before he could protest. He smelled beer on her breath. “Dainty, isn’t this great? The whole apartment is up here!”

A door burst open and a boy in a blue bed-sheet ran out to puke over the railing into the sea. Dan almost vomited at the sight. “Are these guys friends of yours?”

“They’re so nice! We go on hikes with their chapter. Hey, you want a beer?”

“She’s not into parties.” Faith dragged Dan to the railing and kissed him again. “Don’t you love this view of the ocean? I wish I could fly over the waves like a bird.”

“I’ll be a flying fox.” Faith licked Dan’s teeth. She was a foot shorter than him, so she really had to reach for his molars. “Are you into this? Am I bothering you?”

“Does Beatrice drink? I can’t imagine her drinking.”

“Oh, Dainty.” Faith released his shoulders. “You could have everything anyone ever wanted, right in front of you, and you’d still chase BeatBax to hell and back just to make awkward small-talk.”

“Well, you’re her girlfriend, and you’re kissing me.”

“BeatBax and I have an understanding.” Faith considered kissing him again, but smiled mischievously and pulled a bug-stick from her pocket. “But since I’ve kissed you, it would only be fair for you to kiss her, right?”

“Share this bug-stick with her.” Faith kissed the butt of the cricket and put it between Dan’s lips. “It’ll be just like smooching. So don’t say I’ve never done you any favors!”

Inside, half the guests were girls who chatted on couches and drank beer from plastic cups. A portly man in sunglasses and a pink toga taught the crowd to smoke powdered cricket from a bong. “Sometimes I grind centipede and sprinkle it on top. Gives it a kick, you know what I mean? But that costs extra.”

Drunkards clogged the hall waiting for the bathroom. Dan squeezed past and knocked on Beatrice’s door.

“Oh. Faith told me she invited you.” Beatrice was reading her bible in bed. “Is that her lipstick on your chin?”

“It’s alright. We have an understanding. Shut the door, okay?”

He did. “Faith wanted us to share this bug-stick.”

“Oh. Cool.” Beatrice put down her bible and cast off her blankets. She wore footie-pajamas with bunny print. She pat the bed beside her. “Sit down.”

He did. “I’ve never smoked before. I don’t even have a lighter.”

“I’ve got one. Faith and I have smoked bug-sticks since high-school.” Beatrice lit the head of Faith’s cricket and puffed until its eyes glowed red. She blew smoke out her open window. “Do it just like that. If you want to, I mean.” She gave him the bug-stick.

“Where do you get these?” He passed her the bug-stick.

“I don’t know. Faith buys them.” Beatrice puffed and tapped ash into the trash. She passed it back. “Dan, you’ve been staring at me gormlessly for as long as I can remember.” Dan puffed and stared at her gormlessly. “All I ever do is tolerate you and you’re infatuated, like life wouldn’t have meaning without me. Why? You don’t know anything about me.”

“That’s just it, though. All you know are tidbits. I don’t even like birds that much, anymore. I prefer rabbits and bunnies.” Beatrice took the cricket and blew smoke out the window. “And I only know tidbits about you. You barely talk, except to try endearing yourself to me. I don’t know the real Dan.”

“There’s nothing to know. I’m a pillar of salty guilt who can’t stop looking back.”

“You’re at a party. You should just be salt and alcohol.” Beatrice passed him the bug-stick. “Do you really think kissing me would make you feel less shitty about yourself?”

Dan nodded while he held smoke in his lungs.

“Oh, please.” Beatrice kissed Dan and inhaled the smoke from his chest. Dan collapsed back on her bed. She blew hi smoke toward the moon. “There. Now you’ve got no excuse. Get over yourself.” 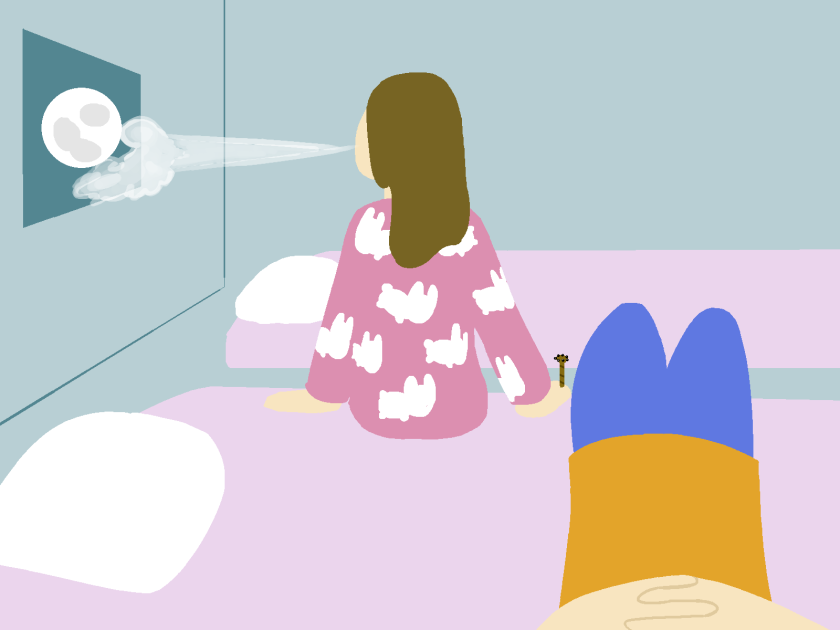 The man in sunglasses and pink toga took several seconds to shut the door behind himself as he fumbled with drunken swagger. When he turned to Dan and Beatrice, he almost dropped his bong in surprise. “Oh shit! I thought this was the can.”

“Two doors down,” said Beatrice. “Didn’t you see the line?” The man sat between Beatrice and Dan on the bed and offered his bong to her. “No thank you. We’ve already got a bug-stick.”

“Sweet.” The man took the cricket and inhaled heartily. Dan stuck his tongue out like he tasted something terrible. “But I’ve got centipede. It makes crickets look like cockroaches.”

“My name’s Henry.” Henry extended a hand for Beatrice to shake.

Dan shook it. He noticed Henry wore his toga higher up his chest than any other frat-brother. “I’m Leo,” said Dan. “Isn’t centipede hugely illegal? More-so than crickets?”

Henry gave the cricket to Beatrice. She wiped off Henry’s saliva with her sleeve, then passed the cricket to Dan. Dan inhaled until the whole cricket was ash. He gave the butt to Henry, who tried to suck smoke from it but failed. “All bugs should be legal,” said Henry.

Henry smirked and tried to pass his bong to Beatrice, who ignored it. Henry eventually toked from the bong himself. He finished smirking to blow smoke in Dan’s face. “I bet you’d want bugs to be taxed, too, huh.”

“No one likes paying taxes,” said Dan, “but I’d wager crickets would be taxed like many other luxury goods.”

“Pfft.” Henry shoved the bong into Dan’s hands, daring him to toke. “I don’t need Uncle Sam stealing my tax-money to build roads for poor people.”

“But you came here on public roads.” Dan held the bong but didn’t smoke.

“Don’t you know roads were better in the 20s, when private companies paved them?”

“What’s that have to do with what I said? If you use a service without paying for it, you’re a thief.”

“No you don’t! A second ago, you said taxes were stolen from you—you don’t pay a dime! You can’t have your cake and eat it, too! Make up your mind!” Leo flinched. “If you don’t protect your property from theft, you rent it at the mercy of thieves. You claim your thieves are the government, so you rent at the mercy of the state.”

“What’d be so bad about dying on your feet as a free man? Better to light a candle than curse the darkness. You’re a closeted communist, and a whiny one.”

“I’m taxed when I choose, because I make my own decisions. I hope you get here someday, Comrade, but I’m not holding my breath waiting for a pinko in denial to escape their mental gulag.”

“Fuck you!” Henry snatched his bong and stood from the bed. “Bugs are wasted on hippies like you, Leo!”

The man in the pink toga stormed away. Beatrice huffed and crossed her arms. “Thank goodness he’s gone. What a weirdo. Why did you provoke him?”

“I’ll be back.” Dan stood from Beatrice’s bed, left her room, and jogged down the hallway.

“Dainty!” Faith waved him to a couch. “Have you seen this guy’s bong?” Henry, smiling at the crowd around him, didn’t notice Dan sit beside Faith. Faith whispered in Dan’s ear. “What happened? I figured you’d wanna talk with BeatBax for a while.”

“Put some liquor in it.”

Faith stood and stumbled to the keg to fill a plastic cup. Dan watched Henry grind bug-bits. “Here, Dainty.” Dan drank the beer in one gulp. Faith giggled when he asked for more. “You smoked that bug-stick, right? Take it easy. Crickets and drinking don’t add, they multiply.”

“Anyone wanna buy a centipede?” Henry unscrewed a jar and made a girl smell it. She grimaced. “I got these from a guy who smuggled `em off an island somewhere. Primo stuff—I sampled some before I drove over. You know, the secret to driving high is to go faster than you think is safe.”

The crowd couldn’t tell if that was a joke or not. Dan examined the centipedes. “It looks like your source got the better of you,” said Dan. “He gave you centipedes with no antennae.”

“The antennae are the best part,” said Dan. “It’s biology: that’s where the pollen is. Don’t be salty just because you got conned.”

“Dainty, what are you doing?” Faith held his hand.

“Why bother?” Dan stood and whipped off his shirt. The party-goers murmured. “Fight me right here.”

“Dainty, what the hell!”

“You serious, bro?” Henry put his bong on the coffee-table and stood. He was an inch shorter than Dan, but twice the weight. “Can’t you see I’d beat the shit out of you?”

“All I’m worried about is cutting my knuckles on your sunglasses.” Now the crowd spoke behind their hands. Frat-brothers in togas were ready to tackle Dan to the floor. “So if you wanna fight, take `em off.” Henry took off his sunglasses. “The toga, too. I don’t want you to blame your bed-sheets for tripping you up once you regain consciousness. Because I’ll knock you out,” Dan said, in case it wasn’t clear.

Henry was hesitant to open his toga, but seeing men in bed-sheets prepared to take his side, he shrugged it off and stood bravely in his boxers.

The crowd went silent. All eyes were on Henry’s swastika tattoo, which was big and bold and professionally inked—he’d obviously doubled down since high-school. Henry shook, deciding whether or not to draw the toga back over his chest. Instead he raised his fists to fight.

Three men in togas tackled Henry. “Get off!”

The frat pulled Henry to the door. Dan didn’t care to watch them chuck Henry off the balcony into the ocean. He sat next to Faith and put his shirt back on. “Faith, I don’t think I can drive home. Can I sleep here tonight?”

“On the couch,” Faith declared. “I’m sleeping with my girlfriend. You can leave in the morning when you sober up. Don’t wait for us to show you the door.”