Dan bit his nails while pacing in the airport lobby. Each time he turned, he checked the schedule on the opposite wall. Jay’s flight filtered to the top as his plane approached.

“How much longer, Dainty?” Faith stretched across four seats, threading herself under three armrests. “Why’d we come so early?” 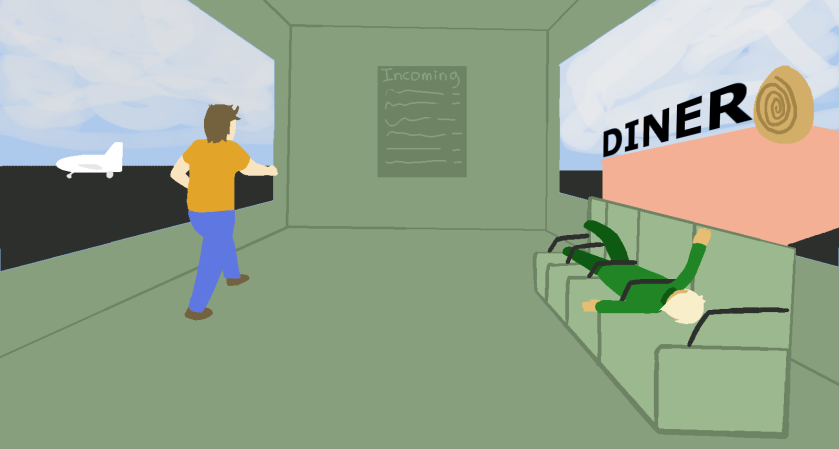 “He’ll be here soon.” Dan scanned the misty morning sky for the shape of an airplane. The landing-strips were frosted and dewy. “I wanted to beat traffic.”

“It’ll be rush-hour on the way back,” said Faith. “Maybe I should drive us home so you don’t have to worry.”

“Are you sure?” Faith now crawled over the armrests. She wore a heavy white sweater, since the clouds looked like rain. “You bite your fingertips when you’re anxious, Dainty. If you have to drive in traffic, you’ll bleed on the steering-wheel.”

Dan resisted putting a finger in his mouth. “I’m not anxious about traffic.”

“Oh.” Faith collected herself in one seat. She crossed her ankles and clasped her hands in her sweater’s pocket. “I miss Beatrice too, Dan. She was my girlfriend. It’s gonna be okay.”

“I don’t want to talk about it.” Before he could stop himself, Dan found his index-finger between his lips.

“Well, can I get you something to eat? Maybe breakfast?”

Dan checked restaurants down the corridor. “Nothing here appeals to me.”

“No, no.” Dan sighed and looked over the streets of Burbank. “A cinnamon-bun sounds good.”

Dan pointed out the window. Across the street, a diner advertised cinnamon-buns dripping with icing. “Let me give you some cash.”

“Don’t worry, they’re on me!” Faith pranced to the escalators. “If JayJay gets back before I do, tell him I missed him, okay?”

As soon as she left, Dan bit a fingernail. He tore more than the white crescent. The skin under the lost nail was magenta. Dan rubbed it to salt the wound.

If Faith saw the nail, she’d throw a fit. Well, no, but she’d coo sympathetically, and that was worse. Dan jogged to an airport convenience-store and bought black gloves. He didn’t wear them right away—he sat near Jay’s terminal and ate all the skin around his nails. When Jay’s plane broke through the clouds, Dan donned the gloves to hide his hands.

Jay was among the first to disembark. Dan waved. “Jay! Jay!”

“How was the flight?”

“She’s buying breakfast. She told me to say she missed you. Did you get good pictures?”

Jay showed Dan his camera’s screen. “Look: these masked dancers lead to this circle of monks. They walk, they chant—it’s like the Kaaba, but there’s a bird in the middle. That’s why my framing is wonky: there are giant birds everywhere, and Sheridanians are emphatic about not photographing them. Here, this statue is actual-size, maybe even a little small.”

“Whoa.” Dan compared the bird-statue to pines in the background. “They must be eight feet tall.”

“Yep. The statue represents the Biggest Bird, a local folk hero. It’s not coddling a toddler, that’s supposed to be a grown man. It’s just not-to-scale.” Jay skipped to a photo of Virgil Jango Skyy. “I’ve never seen anything like Sheridan. You’ve got to go, Dan. You know more about religion than I do.”

Dan tried to press camera-buttons, but his black gloves were too bulky. “Maybe I can write my thesis on Sheridan. I’ll run it by my adviser.”

“Here, I got you a souvenir.” Jay gave him the orange plush fledgling. “I got one for Faith, too, and I bought seashells, but they’re being shipped. Where’s she buying breakfast?”

“She’s bringing buns from across the street.” Dan led Jay to the window overlooking the diner. “There she is.”

“She looks happy,” said Jay. Faith bounced on her toes waiting at the crosswalk with a bag of buns. “How about you, Dan? Are you feeling okay?”

As Faith crossed the street, she saw Dan and Jay at the window and waved at them. “Hey! JayJay!” A speeding bus ran the red light and almost hit her head-on. Faith leapt to safety with a yelp. When her adrenaline wore off, she laughed and finished crossing the street.

Then she was struck by lightning. She left only a scorch on the sidewalk. 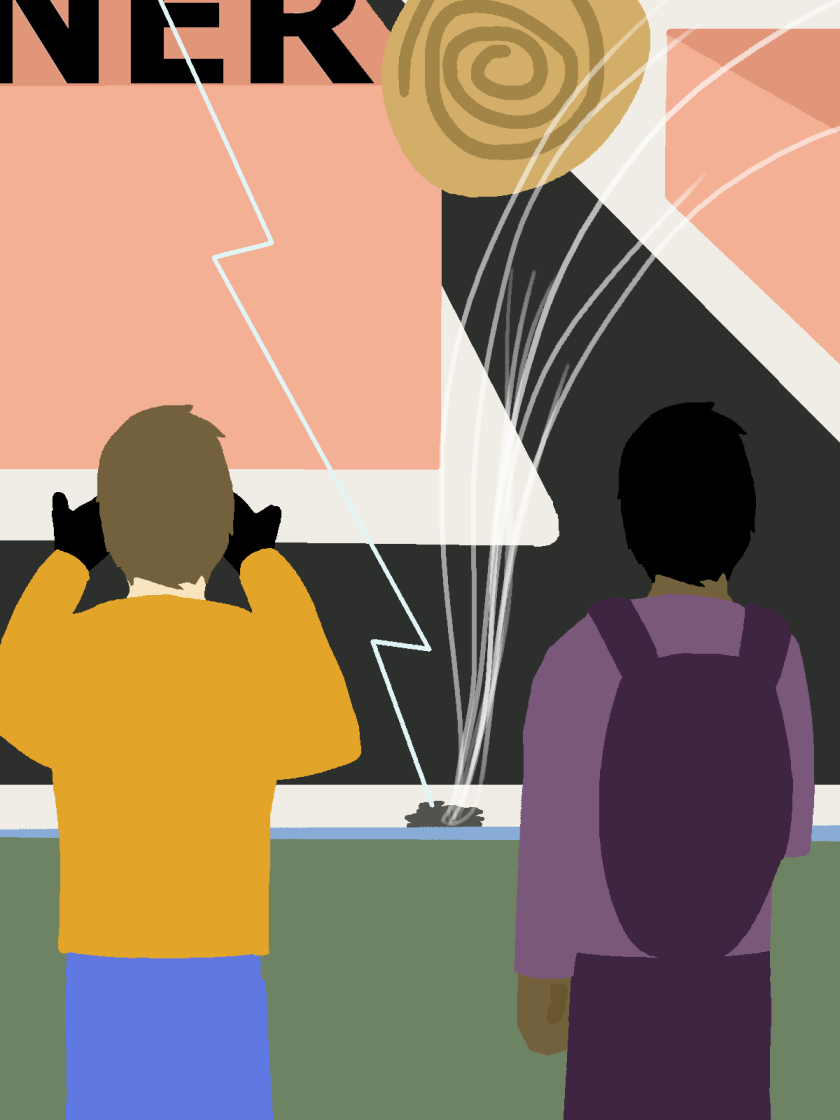