As the Hurricane Planet swallowed her, Professor Akayama sat in her mutilated half-Zephyr. The cockpit’s adjustable chair was the only operational object in the spaceship. Every monitor was cracked but one. The circuits were scorched. Hoping beyond hope, she turned her key in the ignition. “Can you hear me?” The Zephyr was silent.

Akayama popped the glove-compartment to find three days of rations and a cockroach. She had craved smoking, but now felt nauseated by claustrophobia. She stowed the roach in her lab-coat and drank water from her rations.

Because the torn Zephyr had no left side, subterranean rocks rushed upward as Akayama descended. An eyeball bigger than a grapefruit opened on the rock wall. It slid down the wall alongside her, keeping watch. Akayama spun her chair to watch it back. “Hisashiburi,” she said. “Kill me already!”

A mouth opened above the eyeball. “I’m not killing you. I’m absorbing you.” It had three rows of blunt teeth and a massive flopping tongue. “Unlike the other humans I’ve encountered, you seem useful.” 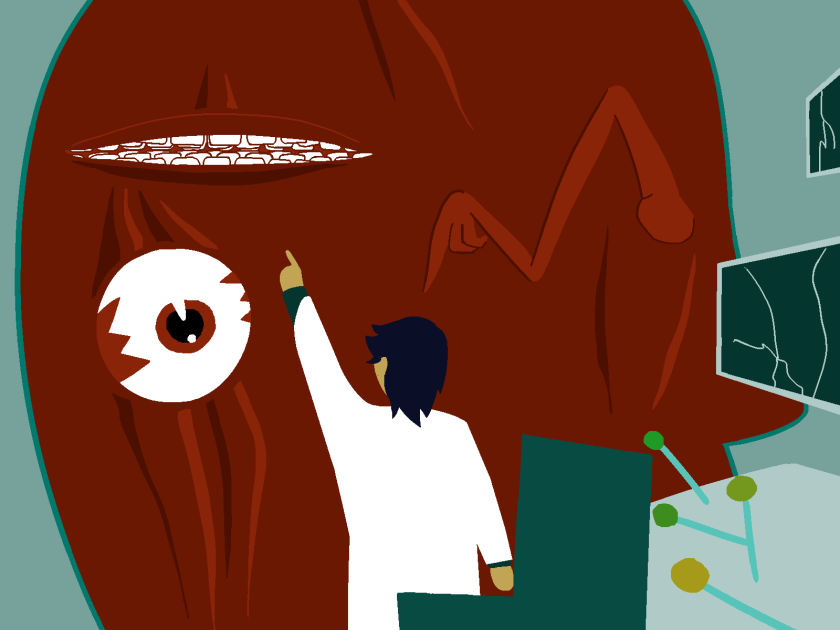 Akayama’s heart dropped. “The two hundred and seven who trespassed on forbidden space? Some brought their children? One child brought a pet bird? You killed them all?”

“Not all of them. I absorbed the bird.” The mouth bared teeth. “What did you do to me?”

“I did everything,” said Akayama. “I built the Hurricane. I failed to prevent its launch. The fiery fate of the universe is my fault.”

“I mean, what did you do just recently?” The eyeball squinted. “You fired a laser at me, and when I smacked you from the sky, you transmitted data! I was about to divide into a million copies, and now I can’t.”

Akayama put a hand over her heart. “My virus affected you. Humanity may have a chance.”

“You misinterpret my intent,” Akayama explained to the eye and mouth. “That virus proves there’s hope to salvage the pilots of the Hurricane.”

“Salvage? Pfft.” The mouth blew a raspberry which speckled her with spit. “My pilots are safely fused with my eternal form. If you really built me, you know my duty is to humanity’s preservation.”

“What do you remember of humanity?” asked Akayama. “Decades have passed since the Hurricane’s pilots were merged. Don’t you have their memories? Can’t you see their grieving widows and orphaned children?”

“I can,” said the Hurricane, “which is why I must divide. My quintillions of backup-copies ensure my memories will last forever. At the core of this planet, your consciousness will join mine. Then I’ll disable your virus myself.” The mouth licked its lips. “Your consciousness will be divided, too, and accompany my every copy. I’ll share you with my copies across the universe until your knowledge is safely stored in my omnipresent mass. Humanity’s best must last for all time.”

Akayama shuddered. “Life isn’t about fearing death. You contain people, but you’ve lost what made them people.”

“Ha! I’m a hundred times the human you are, because I can see a hundred lifetimes at once.”

“You ended a hundred lifetimes at once! Your pilots run in parallel wearing their yoke like a crown!” Akayama didn’t feel brave, but she pointed accusingly at the eye. “How can you claim to be human when you can’t appreciate anything without absorbing it?”

“I’ve got fingers too, you know.” The Hurricane poked at her with an arm from the rock wall. It had two elbows bending in opposite directions and only three fingers with no thumb. “I know the fingerprints of every person I’ve assimilated. Don’t fear merging with me. I’ll preserve you in perfect detail.”

The thought made her knees knock. “When you were born, why did you leave earth?”

“I didn’t. Not right away.” The arm morphed into a slimy tentacle. “First I dove into the ocean and assimilated a giant squid, just to see if I could.”

“And then why did you flee?”

“I wasn’t fleeing.” The Hurricane retracted its tentacle. “I wanted to explore the cosmos.”

“You didn’t just explore the cosmos, you consumed it! But at least you were exploring, a marginally human activity.” Akayama folded her arms. “When you decided protecting humanity meant homogenizing it, everything humane in you died! You don’t even know how many fingers you’re supposed to have.”

The eye tried counting Akayama’s fingers, but she hid her hands in her sleeves. “I’m the most humane being possible!”

“Then grant me my individuality!” She stood from her chair to shout. “And grant it to yourself! You vowed to share me with Hurricane Planets across the universe. If you share me with your copies, nothing will separate you from them!”

“You need me.” Akayama pointed to her nose. “You need my mind unmolested. Aren’t you special? Aren’t you the `I’ of the Hurricane? What could elevate you above countless copies like uniquely accommodating your creator?”

“Hmm.” The mouth bit its lower lip. “What utility can you provide if you’re separate?”

“I could help you reclaim your humanity! I’m the universe’s leading expert on consciousness.” Akayama turned the Zephyr’s broken steering-wheel. “I could load just one of your pilots at a time into my Zephyr’s circuitry. Imagine: each of your aspects can have personal-space to recoup their lost perspective!”

“I could absorb your knowledge and do that myself.”

“No.” Akayama stood her ground. “You lack the necessary motor-skills and sense-organs. How could I operate the Zephyr’s control-panel with tentacles stretching from your bulk? I’ll need to live on your surface, near a star. Otherwise it will be too dark for me to work.”

She felt heavier. The peristalsis reversed direction to vomit her up the planet’s throat. Akayama sighed in relief.

“You can’t live on my surface forever,” said the Hurricane. “I’ll have to hide you when we meet my copies. If they see you, they’ll ask why you weren’t assimilated.”

“Can we stay far from the others?”

“Periodically I sync databases with my compatriots in the Dance of the Spheres. I’ll give you ample warning.”